Games industry veteran Jeff Minter is more prolific now than at any period in his career since the early 1980s – and we’ve got iOS to thank for that.

Few other platforms would support such regular doses of his unique brand of retro-scented whimsy, but it seems Minter is more creatively fulfilled than ever, with GoatUp arriving just two months after the superb Deflex.

It’s typically esoteric Minter fare – you play a nanny goat that has to raise a family. Literally. Billy the kid

With the screen constantly scrolling, you’ll need to make her jump to higher platforms, kissing billy goats along the way to “initiate fecundity” before “actualising” it (in the game’s words) by munching the grass spread across each platform.

Once you have a kid it’ll follow your every move, and you can earn more to form a deadly ‘tail’ which can knock out patrolling enemies. Hit one with the nanny, however, and one of your brood will be sacrificed so you can continue your ascent.

As you climb, the environments change, and the mechanics are tweaked slightly. The second level introduces weapons to temporarily turn the tables on the marauding nasties. Another stage sees you encounter Manic Miner sprites as platforms slowly crumble underhoof. A bridge too far

The next stage introduces bridges – sprint across these and they’ll explode, providing a hefty point bonus, but leaving a huge gap below. Fall off the bottom of the screen and it’s game over – or rather GOAT OVER.

Minter’s typically rudimentary presentation is as charming as ever, and with less of the obfuscatory visual flourishes that can occasionally irritate. The title screen is completely static, while the main menu looks like it’s been programmed in BASIC.

Random text appears as you uncover objects in the grass from grazing, and the legend ‘congoatulations’ flashes up when a new kid is born. Since GoatUp is a Minter game, it’s impossible to gauge whether the misspelling is deliberate or not, but either way it’s one of many amusing touches. Minter wonderland

Occasionally your grass-chomping exploits will reveal icons for Minter’s other iOS games along with text pleas to play them. In-game advertising can often seem insidious, but here the blatant self-promotion is all part of the fun.

What most impresses about GoatUp is how well it controls. The default setup sees you tilt your iOS device of choice to move in that direction, while touching the screen makes your ruminant avatar jump.

The goat may be a little skittish, which means it takes a bit more getting used to than the slightly simpler Doodle Jump, but it’s more flexible, as holding your finger or thumb down on the screen affects the height of the leap. Can you digit?

The alternative controls are possibly even better. With two options for lefties and righties, you simply shift the weight of a single constantly-depressed finger or thumb on one side of the screen and tap the other side to jump. It’s wonderfully responsive and works a charm.

Your time with GoatUp may be fleeting, but you probably won’t regret a single second you spend with it. And if it means Minter can bring us another weird and wonderful iOS game before the year is out, then we’re more than happy to lay down the price of a Magnum for the privilege. 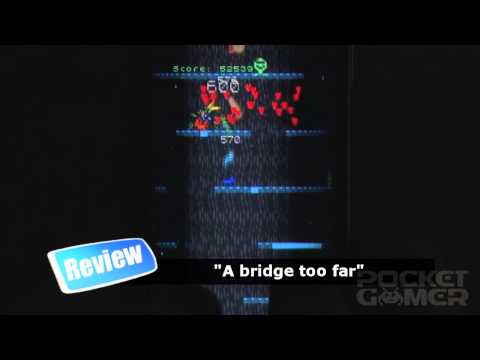 Like Doodle Jump on absinthe, GoatUp is another welcome dose of Minter madness
Next Up :
Valiant Hearts: Coming Home Netflix review: "A touching war story from various angles"

Retro vertical climber GoatUp is out now for iOS