To end this story in the most beautiful way possible, players will soon be able to visit two islands, quite opposite in nature to one another. The absolutely gorgeous and serene Watatsumi Island, home of the resistance forces, and Seirai Island, a desolate island plagued by storms. 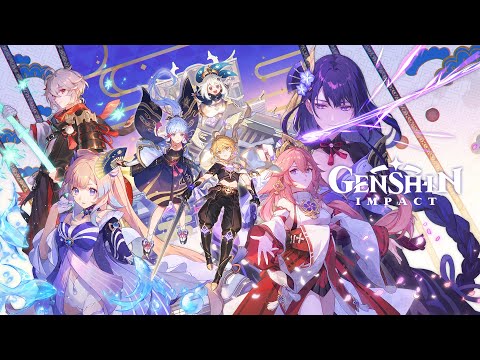 Your path also has some hurdles in the form of new bosses, the Hydro Hypostasis, Thunder Manifestation, and the new Trounce Domain Boss, Signora.

The update would be incomplete without the addition of some new playable characters, so here they are:

Meanwhile, in Liyue, the Moonshine festival will commence soon, where players will get a chance to reunite with Keqing and Xiangling whilst participating in the Moonlight Seeker Event, a massive treasure hunt across Liyue, Mondstadt, and Dragonspine. Players will be rewarded with the new four-star claymore, Luxurious Sea-Lord, at max refinement and numerous other prizes for completing the hunt.

Another new character coming in v2.1, and probably my favourite, is Aloy from Horizon: Zero Dawn. She will be a free five-star character and players with Adventure Rank above 20 can receive her during v2.1 on PlayStation and v2.2 on all other platforms.

The final inclusion for this update is fishing! Relax by the lakeside and catch fish to procure fish meat or exchange them for other rewards and fishing rods at the Fishing Association. Using the Pool of Sapphire Grace added to the Serenitea Pot system, players will also be able to grow Ornamental Fish in their realms.

Genshin Impact’s v2.1 update drops on September 1st and you can download the game now for free on the iOS App Store and Google Play Store.

Check out the best RPGs to play on mobiles right here!
Next Up :
Polity is a life sim MMORPG where you can rule or be ruled, out now on Early Access on iOS and Android