Put on your dancing shoes and step onto Free Fire's dance floor!

Free Fire is turning four and four renowned individuals, the world-famous DJs Dimitri Vegas and Like Mike, and Free Fire’s very own Alok and KSHMR are coming together to create Free Fire’s fourth-anniversary theme song, ‘Reunion’.

You can vibe to Reunion on Free Fire’s official YouTube channel and also see how these four DJs were given their invites through Falcon, Free Fire’s very own pet. See our heroes don the coolest outfits that their in-game counterparts wear and groove with them! 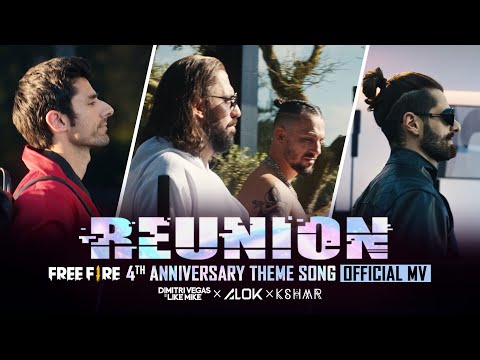 Alok and KSHMR have been at the forefront of Free Fire for a few years now, producing the most amazing songs exclusively for Free Fire like ‘Vale Vale’ and ‘One More Round’. Alok also won the award for Free Fire’s most popular character. Who doesn’t love these guys? You can play as them. With them and even against them!

Free Fire’s 4nniversary begins today and Garena has promised to bring everyone together into the Free Fire Universe for the ultimate celebration. The entire Training Ground is brimming with exclusive anniversary-themed events and there’s an entire music party stage that has been set up. So, put on your dancing shoes for that. Until September, you can also enjoy the projection mapping and mini-game.

The entire celebration will last a week until September 5th, but on August 28th everything will culminate into the biggest event Free Fire has ever celebrated!

A brand-new mode called The Clash Squad Cup will be playable on the 28th and 29th of August where teams of four will compete against each other in a tier-based system. Each team will play three matches and will be rewarded according to their results.

All matches played on August 28th will grant you Magic Cube Fragments with the exception of the new mode. Logging in on the 28th will also give you access to Like Mike’s character Thiva for free! There’s a lot to do so keep your schedule empty on the 28th, cos you’re partying non-stop in Free Fire!

Until September 5th, there will also be daily login rewards, gifts, daily missions, and lots of other minigames. You can also unlock the Free Fire birthday image to get an exclusive male bundle for free!

Download Free Fire on the iOS App Store and Google Play Store and enjoy the celebrations!

Also check out some of the best battle royales to play on your mobile!
Next Up :
Dead Cells mobile version finally receives all of the current content in the latest update