Win every fight with these tips

G.I. Joe: War on Cobra has finally launched on mobile devices, bringing Joe's small-scale toy action to screens which are just as small, and we're happy to report that they've done a darn good job of it.

Interestingly, G.I. Joe: War on Cobra takes a similar approach to gameplay than Supercell's recently released, and discontinued, Rush Wars. Despite coming from a company much smaller in the mobile market than Supercell, War on Cobra feels a lot more polished, and undeniably looks an awful lot better. 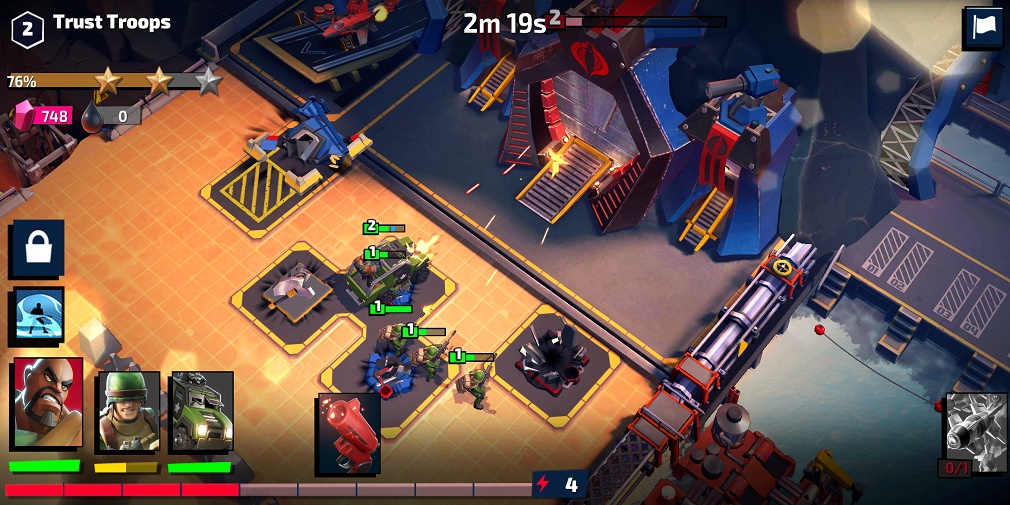 This game follows a similar formula of building up the ultimate base, and then tearing down the bases of enemies. There are loads of tactics to employ in both the base construction and tearing bases down, and in this guide we'll focus on tearing down enemies.

Read on below for all of the essential battle information you need for G.I. Joe: War on Cobra, and make sure to keep reading Pocket Gamer for even more in the near future.

I've already pointed out the similarities between this G.I. Joe game and Rush Wars, but there is one key difference that happens in battle which changes the pace of the entire game, and that's how much control you have over your units.

While in most games of this type have you place down units, and then hope the AI directs them where you want them to go, here you have direct control over unit movement, which offers a bunch more strategic advantages.

For example, you can coax enemy foot soldiers out of cover and mounted units, by moving close, then retreating, dragging them out with you, making for a much safer way to approach difficult situations.

Some units can actually work shockingly well together, and not just in the sense that they make a good team.

Although it's certainly true that a single high-damage unit can be well guarded by a flock of smaller infantry, you can actually pair units up, like pairing your primary commander unit and a vehicle unit.

Some vehicles can be rode, which allows your commander to move much more quickly, become more well guarded, and of course, results in more damage output.

You may end up coming up against certain bases or situations which feel too difficult to overcome, or at least, not easily.

When you first start the game you will only be allowed a limited number of units to go into battle with. You can level these individual units up, of course, but the real benefits will come when you are able to place down more units.

You won't be able to fill out your party at first, not until you are level 6, but even then you should make sure to be able to easily summon units into the fight, and not have units with high energy requirements going to waste.

As mentioned just above, having units in your team that you're never going to use will not help you in the slightest. Some enemy bases don't have enough units and buildings for you to attack and destroy for energy to summon everyone you want.

Smaller infantry, and units that only require two or three energy, are much easier to send into the battle early on, which is necessary.

Remember you can force your units to move and target buildings, instead of mounted units or weapons, which will give you more energy to summon more capable units.