Indie darling studio Housemarque is quietly building a reputation for itself in the frosty climes of Helsinki.

After illuminating the PS3 with Super Stardust HD and Dead Nation and showing off its platforming chops with the stylish Outland, it’s now making its iOS debut with the altogether fluffier and cuddlier Furmins, a brain-scratcher starring little hairy smiley ball-creature things.

Don’t let its fuzzy exterior fool you. This is as devious and mind-bending a puzzler as anything on the App Store. The premise is simple – guide the Furmins to each level’s exit - but the execution is phone-bitingly tricky.

Every one of the game’s 75+ stages has various bits of paraphernalia to manoeuvre about, be they trampolines or slabs of slate, and then there’s the fixed gubbins like springboards and conveyor belts (all activated with a jab of the touchscreen).

Rage Against The Machine

Once you’ve set up your level, you hit the 'play' button in the top corner and watch as your Furmins pour out of their home, now at the mercy of gravity, physics, and your own attempts at manual labour.

Most of the time they’ll bounce off your ill-positioned trampolines and get stuck in a digital purgatory, hopelessly waiting for you to hit the 'reset' button and try it all again.

It’s all a bit trial and error at times, with microscopic adjustments needed to bounce the little Furmins in the right direction - a frustrating process that feels like Angry Birds at its worst.

When you do get it right, though, you can sit back and smugly watch your haphazardly constructed Rube Goldberg contraption deliver those friendly little Furmins to their rightful home.

Cleverly, Housemarque consistently introduces new elements to the mix, from melting ice blocks to jet-propulsion cannons, so there’s always a reason to plough on to the next level.

And in the smartest move of all, none of your moving pieces resets when you restart a level, meaning you can concentrate on that one irksome trampoline while everything else stands its ground.

Small design decisions like this can make or break a game, so credit to Housemarque for concentrating on the details.

Even when you do get those synapses firing and grind your way through every level, there’s the taunting pull of the three-star challenge to get stuck into. Every level has sweets scattered across it like coins in a Sonic game and, as we all know, Furmins love sweets.

For its tiny price, Furmins is top-quality iOS entertainment. Plenty of content, tight design, and even a hefty chunk of replay value thanks to those tasty sweets. As always, the promise of DLC means more Furmin action in the very near future, but even without this is fine touchscreen fare from Finland. 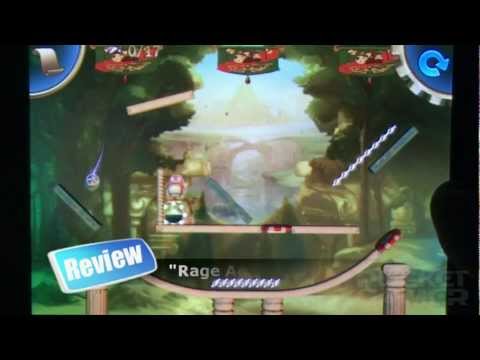 Smart, slick, and seriously well made. Housemarque does it again
Next Up :
Star Discord review - "Needs polish, but it's shaping up to be a true RTS on the go"