It's rare that a shooter feels at home on mobile. There are plenty of good blasters on the App Store, but only a handful that feel like they truly belong there. And now we've got another one to add to that list - Frag: Pro Shooter.

It's a team-based multiplayer battler with more than a few interesting twists up its variety of different sleeves. There's no grit or grimness here either - primary colours are the order of the day, with blue skies and green grass marking the limits of the murder arenas.

There are shades of Overwatch and Quake Arena here, but with Clash Royale concepts and some other mobile tenets thrown into the mix as well. And it all comes together to create something that's pretty special.

There are five people on each team, but you're only ever controlling one of them at once. The rest of your characters are controlled by the AI. You jump between them when you die, so making sure you know what all of the shooters you've unlocked are good at is key to succeeding.

The controls here are designed to be as simple as possible. One stick moves you around, another aims your gun. When your reticle rests on an enemy, so long as they're in range, you're going to start shooting. Each character also has their own cool-down enabled special move that you unleash with a tap of a button.

Some characters are slow and hulking, with powerful weapons that take a long time to reload. Others are better from long range, others still are more like support classes that need to stick with the rest of the team if they want to be the most effective. 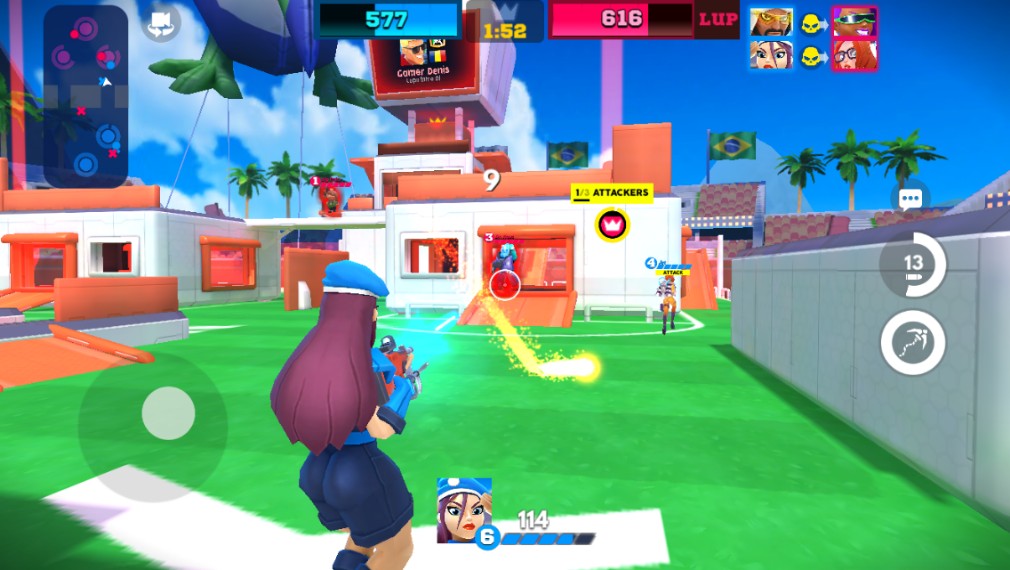 Your characters are based on a deck of cards. Get one card and you'll unlock a unit, but get more cards and you can power them up. Getting a balanced set of heroes is key to succeeding, but thankfully it's always clear what role characters play, so you can switch them out safe in the knowledge that you're not leaving yourself vulnerable.

Constantly playing as different types of unit keeps the play fresh, and means even from the start you're experiencing a whole swathe of the game. Everything is designed so from the get-go you're going to be having a literal and metaphorical blast.

Obviously your team mates being AI controlled does lessen the possibility for strategic play, but you can tell them which capture points to attack and which to defend. Those capture points are simple targets - shoot them and they do damage to a team's overall score. Killing also takes chunks of a team's points away, and the first team to be reduced to zero, or with the lowest score when the clock ticks down, loses.

The shooting here is slick and smooth, and there's a connectedness to the action that ensures everything feels important. Sure sometimes you'll jump into a new character and die instantly, but other times you'll cut through the opposition like some sort of arena knife through digital butter.

Frag: Pro Shooter has some great ideas, and it runs along with them with great aplomb
Next Up :
UFO99 review - "A fun little arcade game on the go"