Baron Kickington isn't a particularly shrewd media man, but when it comes to taking advice from his underlings about which players are getting a bit sleepy he's second to none.

In his first season he's led Hull City from the middle of the Premier League, thanks mainly to their alphabetic positioning at the start of the campaign, to somewhere slightly lower down the table.

He also managed to win the friendly cup, somehow pushing a team of second string players to a magnificent 6-1 win against Sampdoria in the final. He also accidentally played a goal keeper in defence for a while.

But here's the twist. Baron Kickington is me. He's just the name of my managerial prospect in Football Manager Classic for PS Vita. It's me tapping the buttons, me making the decisions, and me selecting the goalkeeper.

And there are lots of decisions to make. You could get lost in enormous caverns made of the possible permutations for each match. This is Football Manager, in your pocket, with all of its juggling, frustration, transfers, and man-management intact.

And it's pretty damn good. Albeit with some pretty obvious problems 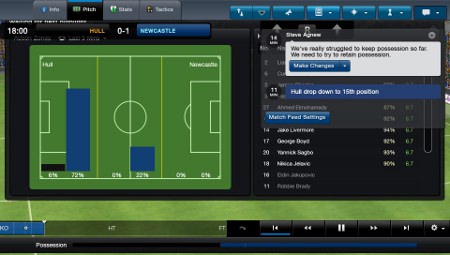 The stats never lie. Nor does the scoreboard

There are two main game modes: Career and Challenge. Challenge mode places you as a manager in a tough situation. Maybe you need to pull a team from the relegation mire, or turn around a dispirited dressing room. It's a chunk of the main game, a taster for the more experienced.

Career mode is the meat of the game. A stats-heavy campaign to take the team of your choice from wherever you find them to the top of the table.

There are countless teams to choose from, from an array of countries. You'll deal with real-life players, in their real-life teams, and try and coax more out of them than they could ever achieve in the real world.

Everything is dealt with from a series of menus. There's your email menu, where you'll find information about scouts, physios, possible transfers, and your reputation in the media. You'll give quotes to journalists, or tell them to sod off.

Then there's a calendar the game flips through, telling you about the comings and goings in the football world. When the page turns over to a game, it's time to get your tactical hat on. 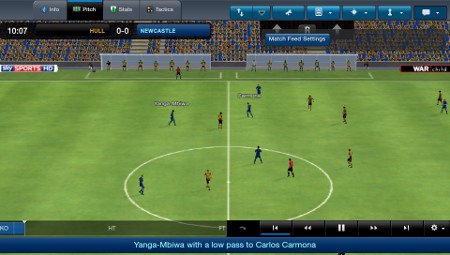 Much like in every football game, sometimes the commentator gets it a bit wrong

You pick the team, choose the formation, set the tactics, and even the demeanour you want the team to adopt.

Once the game kicks off pulling the right trigger drops down a menu that lets you quickly swap things around. Want your defence sitting deeper, or your midfield more fluid? In a few taps you're good to go.

Highlights play out as little snatches of a 3D kickaround. You always know something is going to happen when the game switches to a pitch-side view, and while the clips are a little jagged around the edges, watching one of your strikers belt the ball into the back of the net is still a thrill. 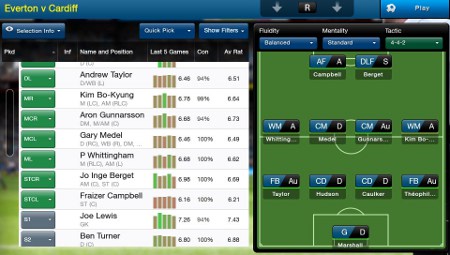 What's less of a thrill is the fiddly touchscreen controls. If you don't have fingers chiselled down to fine points then navigating the menus can be a bit of a chore.

You'll tap the wrong things, close stuff when you didn't mean to, and generally get in a bit of a huff.

You can scroll through menus with the analogue sticks, but stabbing at the buttons, especially in the menu along the top of the screen, can be a bit of a pain.

It's not the only problem, either. Load times are slow, and this means there's none of the fluidity you'd expect from a portable gaming experience.

These troubles tarnish an otherwise solid game, and while there's never any call for super-fast reactions or precise control, having to undo your substitution for the umpteenth time because you've sent a striker to play in defence, or waiting a few minutes for your career to load, is pretty annoying.

Still, the overall experience is an enjoyable one, albeit slightly daunting for anyone who's never played a Football Manager game before.

This is a strategy game through and through, about managing the numbers ticking behind your team.

And, like I said before, it's pretty damn good - as long as you can get past the sluggish controls and those annoying load times.

It's not perfect, and the controls in particular are annoying, but there's a decent management sim here all the same
Next Up :
Roller Drama review: "Scheme with your team, skate great"