Float is an interesting one. It's sort of like a grown-up one-touch arcade experience. It's calmer than the likes of Crossy Road, and it looks a lot nicer as well.

But it still trades in frustration. And it doesn't quite have the compulsive chops to wrap its petals around you and soak you with sweet sweet nectar.

There's definitely something here, but while the initial buzz the game gives off is a pleasant one, it doesn't manage to sustain that feeling the deeper you get into the experience.

The game sees you controlling a flower. It's floating on a body of water, and it's up to you to help navigate through a series of obstacles.

You do this by tapping the water behind the flower. This creates a ripple that pushes the lily forwards. You don't have to just tap behind though, poking the screen at any side of the flower will push it in the opposite direction.

There are rocks to avoid, spinning blocks, and bursts of much quicker current. And the game adds more obstacles as you swoop through the various levels that it gently places in your path. 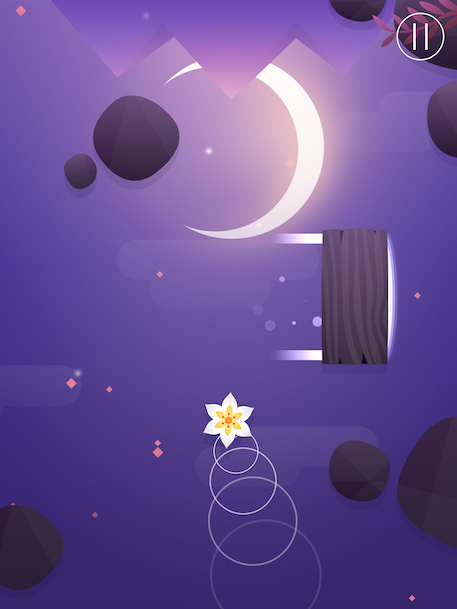 There's a checkpoint system that lets you move through the levels, but things do quite often get a bit fiddly. Figuring out the best way to tackle things is key to success, but even when you get to grips with the controls things don't quite work the way you want them to.

You'll find yourself flopping into walls, or getting stuck in slightly desperate backtracks as you try and avoid the things that are trying to mash the petals you're attempting to keep alive.

Things do tend to get a bit repetitive as well. While the backgrounds you're working your way through do change, the basic shape of the game remains pretty much exactly the same.

There's still fun to be had here, but you can't help but feel that the game is missing that vital something. That spark that would push it into the upper echelons of App Store excellence.

Instead it ends up stuck in a bit of a rut. You'll enjoy the time you spend with it, but you won't be able to shake the feeling that you should be enjoying it even more.

Float has a nice idea, but it doesn't quite manage to hold your interest
Next Up :
Alien: Isolation review - "Chestbursting fun in the palm of your hand"

Float is a peaceful but challenging one-touch game, coming to iOS next month