The flap is over: Flappy Bird to be pulled from sale on Sunday

'I cannot take this anymore'

Flappy Bird developer Nguyen Ha Dong has claimed his hit game is to be pulled from both the App Store and Google Play on Sunday 9 February.

Dong, who has been on the receiving end of the sharp end of many critics' tongues following the success of his endless runner, claims the decision isn't motivated by any "legal issues".

Instead, he's hinted that the pressure brought on by the success of the game has just been too much.

"I am sorry Flappy Bird users," said Dong in a tweet. "22 hours from now, I will take Flappy Bird down. I cannot take this any more."

Earlier in the day, Dong had tweeted that the game was "a success", but that it also "ruins my simple life".

The news comes just hours after the iOS version was updated to include redesigned graphics, more coloured birds and night stages.

A version has also appeared on Windows Phone, as reported by BBC News, with the developer listed as IG Mobile.

However, the game itself doesn't play in quite the same manner, with the bird staying in flight longer between taps than in the original version. The app also opens with an ad (which can be skipped) as well as the standard banner ads, suggesting it may be a rogue release. 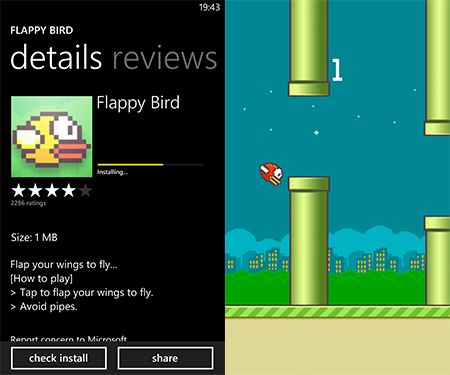 Dong has previously apologised to gamers for the late arrivial of a Windows Phone build, claiming he was "working hard" to make it happen - though events today would suggest an official release on Microsoft's OS is now unlikely.

Speculation has suggested that Dong may have employed bot farms to push Flappy Bird up the download charts, though Dong's own take is that Flappy Bird's rise has been entirely organic.

You can read our take on Flappy Bird – and just how much the free release, entirely devoid of in-app purchases – may be earning from banner ads.