A lot of people claim that in-app purchases are just like pushing another coin into an arcade machine, and in some cases the analogy works pretty well. You're paying to keep going after making a mistake, and that's fair enough.

Final Fantasy: All The Bravest is different. There's a dark, villainous truth at the core of Square Enix's latest assault on the App Store that Sephiroth himself would be proud of.

But, before we get to that, we should meet the heroes of the piece. There are, after all, lots of them.

The game is a pixel-style series of blasts from the Final Fantasy series's past. You're leading a ragtag band of heroes through a world map, smashing any monsters or bad guys that pop up along the way.

So far, so Square Enix, but the core of the game feels more like a card-battler than a classic 8-bit RPG. You're walking a predetermined path, fighting battles at set points, and those battles have none of the tactics or choices you'd expect from a Final Fantasy scrap.

Instead, all you do is tap on your band of warriors. One tap equals one attack, which will chop some health off your enemy's HP bar. It also means a retaliation, and the twist is that a single hit will kill any of your warriors.

Once they're dead they'll wait patiently off-screen for three minutes, before springing back to life and leaping into the fray. There are different kinds of heroes, but you never get any say in who your starting team is, where they stand, or what attacks they're going to use. You just tap.

A 'fever' bar fills up every three hours and lets you tap your heroes as much as you want rather than having to wait for them all to regenerate their ability. Again, it looks pretty, but the only thing it adds to the game is the experience of putting your iOS device to one side and waiting for it to generate again.

The heroes you collect as you play are generic characters from Final Fantasy games of yore, some of them more recognisable than others, and all with their own styles of attack, which at least makes for a visually interesting game.

Then there are the more famous stars of the show, who you have to buy for 69p a pop. These are the big names of the series, like Cloud and Lightning, and they can do huge amounts of damage, but you have no idea who you're buying because the purchases are random.

But here's the shard of ice at the heart of the game. You will die, repeatedly, and if you don't want to wait until your characters pop back to life you'll have to use a Golden Hourglass to bring them all back. These cost 69p for three.

Let's take a look at that. You couldn't have done anything differently in the fight, because you don't have any control over what happens. All you could have done is tap in a different order, but that wouldn't have made much difference.

The game is weighted such that in some battles your entire team will be wiped out while you look on in impotent dismay.

It's not like an arcade game, where skill and reflexes will get you through, where there's a chance that you'll succeed and move on to the next level. You are going to die no matter what, and when it happens you can either wait or pay up.

Square Enix hasn't had the best time with its in-app purchases and App Store pricing, but this takes the biscuit. There's hardly a game here to begin with - it's more a series of flashing lights to try and entice you to throw some cash down, cross your fingers, and hope you end up with a character you like.

Final Fantasy: All The Bravest could have been a sweet, nostalgic game - something without the weight of a story buckling its squidgy, pixellated legs. Instead, there's a store front and some tapping. Coming from a studio with the history of Square Enix, that's just not good enough. 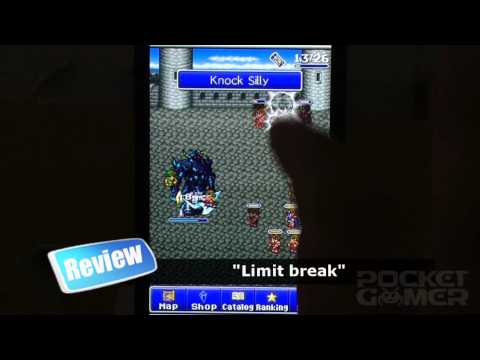 Without the in-app purchases, Final Fantasy: All The Bravest would feel a little flimsy. With them, it just feels tacky
Next Up :
Hundred Days review - "A success for the management genre"