Crytek is best known for the Crysis games, a series of shooters famed for processor-destroying graphics, gritty super-suit powered violence, and big open playgrounds for you to kill in.

In essence, it's famous for doing the exact opposite of what it does in Fibble.

Fibble is a cartoon puzzler featuring charming aliens, tightly bordered levels, and no discernible hyper-violence at all. It's an interesting step, and it's one that more or less pays off.

The game is an intriguing mix of physics, platforming, and miniature golf. You control the titular alien, whose tiny spaceship has crash-landed in a regular suburban house. It's up to you to gather up his lost crewmates and blast back off into the galaxy.

You do this by navigating your way through a series of mazes themed around different rooms in the house, aiming to end up in the spinning portal at the end of each of them.

There are 30 to contend with, and four different rooms to work your way through. You control Fibble by flicking him like an elastic band, tapping on him then dragging back and releasing.

Points are awarded for collecting coins and stars. You also get bonuses for using fewer flicks, while doing everything in one will net you a gold medal. As you collect the members of your crew you get to place them at specific points in levels to utilise their special moves.

Some of these let you jump over obstacles, while others let you change the direction you're heading in or give you a much-needed speed boost, and all are performed by tapping the screen at the right time.

The added abilities keeps the game fresh, and having to figure out where to put your crewmates at the start of each run adds an extra puzzling element to proceedings.

Fibble is a lot of fun, there's plenty of content, and chasing medals and high scores will keep you coming back. This is high-end iOS action-puzzling at its best, and while it might not be the most innovative game out there it's a welcome surprise from a studio known for identikit space marines. 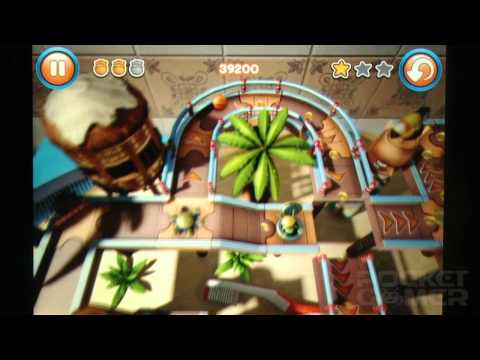 An impressive iOS debut, Fibble is an entertaining and engaging puzzler, albeit one that never quite sparks into life
Next Up :
Hindsight review - "Deeply emotional but a tad repetitive"

Sponsored Feature: Crytek reveals why it decided to begin development on mobile and its future plans for Fibble