The Trawler Report: Sway, Space Bikers and Ferrari GT lead the charge of the Lite brigade

It's a charge of the Lite brigade this week, with so many notable demos released that we ran out of space to fit in any fully fledged freebies. Apart from the Crap App of the week that is, but we'll get onto that later.

As the weather's starting to improve, with the daylight hanging around past mid afternoon finally and the sun even making the occasional appearance, we've got some bright and fun games to match.

Just because a game looks like it was made for kids, though, it doesn't mean it won't make them go crying to mummy once the difficulty curve kicks in.

In fact, this week's two toughest games are those that look like they've had their characters nabbed straight from a child's toy box. Perhaps iPhone publishers are trying to breed a new generation of super gamers who'll one day bring about the abolition of the Easy mode.

The best free iPhone games in the App Store

Space Bikers Lite
By Chillingo
What is it? It's a tricky but addictive trial biking game
Type Demo 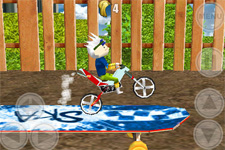 Space Bikers may look cute, but underneath the colourful, cartoony visuals lies a hardcore physics challenge. You play as the Space Bikers - tiny intergalactic explorers who have crash landed on earth. In each level, you collect components - anything from lightbulbs to golf balls - in order to get your ship up and running again.

It's very easy to knock your biker off their ride though, so careful touchscreen taps and tilts are the order of the day. The Lite version includes a level for each of the game's characters - four levels in total. None of the levels is a breeze, though, so this should keep you occupied for a while. Long enough to get you both frustrated and hopelessly addicted at any rate.

Ferrari GT Lite
By Gameloft
What is it? It's Gameloft's great Ferrari-licensed racer
Type Demo 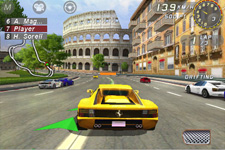 Although it's easy to compare Ferrari GT to Gameloft's other famous iPhone racer, Asphalt 4, the two are actually quite different, even if they look similar from a distance. Ferrari GT is a little more realistic, and its racing style is more concerned with controlling your car around corners rather than collecting boost bonuses. Like Asphalt 4 though, it looks bloomin' marvellous.

Although just a taster for the full game, which includes a whopping 33 different Ferraris to drive, this Lite version will let you get a feel for the game's controls - one of the most important aspects of any racing game.

Bobby Carrot Forever Lite
By FDG
What is it? It's the latest version of the long-standing mobile puzzler
Type Demo 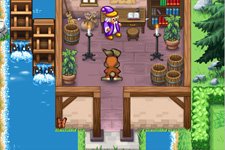 We've been Bobby Carrot fans for years now at Pocket Gamer. Although every game has been an iteration on the same familiar formula, he never fails to charm, and the gameplay is always the very definition of rock-like solidity. You control the eponymous hero, collecting carrots and navigating your way to the exit of each maze-like level.

Six levels are included in the free version. If you haven't played a Bobby Carrot game before, we recommend strongly that you give this Lite version a try.

Elemental Monster TD Lite
By Hudson Soft
What is it? It's Tower Defence meets Magic the Gathering
Type Demo 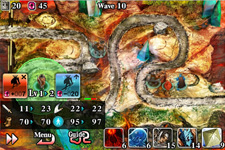 Now that enough tower defence games have been released on iPhone to fill at least a whole screen of icons, just releasing a bog standard knock-off isn't really good enough any more. We've seen some interesting takes on the genre recently, like the ultra-hard Geodefense and the strategy-infused Sentinel. Elemental Monster takes a different tack, bringing cards into the equation.

Each card represents a type of 'tower', although it might actually be a warrior as opposed to a static building. You can buy lots of different cards between levels, and before each battle you construct a deck of your best players. There are 50 to collect in the full version. If you're fed up of Fieldrunners, check out Elemental Monster for a different take on the formula.

Zentomino Lite
By Little White Bear Studios
What is it? It's Tangrams for squares
Type Demo 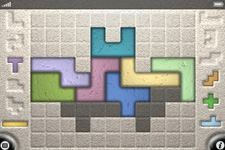 We thought highly of Zentomino at review, and it won itself a silver award to boot. Now you can try it for free thanks to this Lite version. A jigsaw puzzle of sorts, it has you constructing a specific shape out of a selection of oddly-shaped smaller ones. Like tangrams, but with cubes instead of jagged triangular shapes, Zentomino lets you take a breather and relax even as it challenges you.

The Lite version's fairly generous, with 18 puzzles included. The full version does come with a lot more, though - 153 in fact. If you're looking for a chilled out game, but want a change from standard jigsaw puzzles or tangram games, give Zentomino a whirl

Sway Lite
By Illusion Labs
What is it? It's a ragdoll-slinging physics game
Type Demo 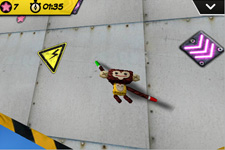 Sway Lite actually appeared on the App Store a little while ago, but was whisked away again after minutes due to some technical issues. Hearts across iPhone gaming land must have sunk at that point, because Sway is one game everybody with an iPhone or iPod touch should try out. It features ragdoll physics and characters that, rather aptly, look just like ragdolls. You swing them around, controlling each of their arms with a thumb.

It's very difficult at points, and you'll undoubtedly find your ragdoll launched into the endless abyss a few times as you mistime jumps, but Sway is a game that looks fantastic and plays just as well as it looks. The free version includes the first few levels of the full game.

That's What He Said
By 3TC Applications
What is it? A poor excuse for a joke app
Type Full 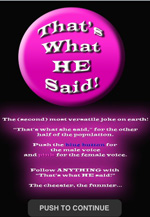 The searing inanity of That's What He Said is almost blaring enough to eclipse even a fart simulator. It consists of two buttons, one of which plays a clip of a woman saying 'That's What He Said'. The other says the same thing, but with a man's voice - one that generally adopts an embarassing cod-camp tone.

Much as it pains us to say so, it's not too hard to imagine when a fart simulator might cause some younger kids to crack up. But this? Really, anyone planning on using this as a wry, 'funny' way of responding to someone should be throroughly ashamed of themselves.