The free iPhone game Trawler Report: Tornado Mania, Azkend and World of Tunes all ripe for the picking

We've been inundated with big releases of late. We'd barely finished with Assassin's Creed when Terminator Salvation dropped onto the App Store's floor. Now that we're heading towards the blockbuster movie season, you can expect to see a good few more high profile movie games turn up, although we don't think they'll all be quite as good as Gameloft's recent successes.

On the freebie front this week, the outlook is quite different. No humungus brands here, just a selection of free portions of some of the iPhone's weird and wonderful platform-exclusive games. Ok, Tornado Mania may have appeared on Java mobile phones too, but it qualifies under the Weird & Wonderful banner anyway.

It's one of the things we love most about the iPhone games scene - you're never very far away from another oddball game that would have little chance of getting made on a traditional handheld gaming console. Anyway, that's enough App Store adultation for now. Onto the freebies!

Tornado Mania Free
By Digital Chocolate
What is it? It's a game where you control a tornado, 'Nuff said
Type Demo 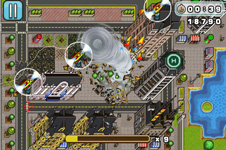 Digital Chocolate just keeps on pumping out its mobile classics onto the iPhone. The finnish virtuoso just gave us Pyramid Bloxx and Kamikaze Robots, now we have Tornado Mania, too. Not that we're complaining, since Digital Chocolate's games have weathered through the translation very well.

In Tornado Mania, you control a tornado as it tears around residental and city areas, ruining lives. Far jollier than it sounds, all you have to do is put your finger on the touchscreen to reverse the motion of the tornado in order to get it to roll over houses, cars and other buildings.

You can then construct your own city with the buildings the tornado has pilfered. The Lite version has a limited number of objects and modes available, but it's a fairly generous taster nevertheless.

Dropship Lite
By ngmoco
What is it? It's a stylish vector space ship manoeuvering game
Type Demo 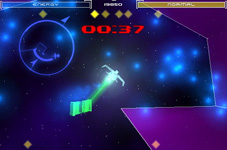 Vector graphics may be a relic of the past for the most part, but Dropship makes them look great, and up-to-date, once more. It's a game where you control a landing craft that has to collect packages from the surfaces of planets and rescue any survivors while avoiding getting blasted away by any of the natives.

This freebie lets you take on the first few missions, and it's one Lite version we're particularly glad to see as Dropship is a game that's not necessarily that easy to grasp from a short description and screenshots alone.

Iron Sight Lite
By Polarbit
What is it? It's iShoot in 3D
Type Demo 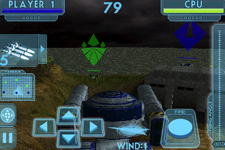 If you're very new to iPhone gaming, you may not have heard of iShoot, but it was big news a short while ago. It was essentially the iPhone's Worms before we knew that Worms was actually coming to the platform. Polarbit's Iron Sight takes the concept of turn based trajectory battling to the next generation by adding an extra dimension - to make it 3D in other words.

It's fairly forgiving, making Iron Sight surprisingly accessible. As you plan your shot, it almost starts to feel like a golf sim as you watch the line indicating where your missiles will land fly off into the distance. The Lite version lacks the all-important online multiplayer modes, but offers a tutorial so you can see if you get on with Iron Sight's basic dynamics. 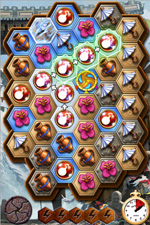 It's easy to become jaded when you see game after game made in the same mould. However, occasionally you find a title that succeeds with a familiar experience just by doing it so darn well. Azkend is one of these games, which is why it managed to win itself one of our Silver awards at review.

All you have to do is drag your finger across the game board to match up similar symbols. You get to play through the first few levels of the full 50 in this free version. Although there are a good few games of this type on the App Store, Azkend is one of the few that comes with our full stamp of approval.

World of Tunes Lite
By Com2Us
What is it? It's Tap Tap Revolution dropped off at Odaiba bay and pumped full of mind-altering substances
Type Demo 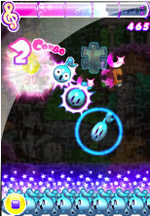 World of Tunes wins the Pick of the Week slot by virtue of its refreshing oddness. Although it's a fairly simple rhythm game, the funky visuals add a delicious layer of charm. Don't expect to be tapping along to Coldplay here, though. World of Tunes is strictly full of odd bubblegum tunes only.

They'll either drive you mad or propel you into buying the full thing. You get two songs to play through for free, one of which is a boss level. If you enjoyed Tap Tap Revenge, but are looking for something a little more 'out there', give Word of Tunes Lite a spin.

4all: Video Guy Calvin Lite
By Area 851
What is it? It's a cry for help, possibly
Type Demo 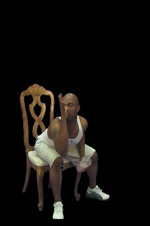 Everyone knows at least one person like Calvin. It’s that person who’s desperate for attention, but isn’t really funny or talented enough to do anything that really deserves it. What results is usually frequent bouts of gurning and the making of strange noises as people look on in mild bewilderment.

Video Guy Calvin is an app that allows you to watch a handful of videos of precisely that. He might be pretending to wash the windows, or he might just sit down and blow a raspberry at you. You never quite what Calvin might do. He’s just that kind of a guy.

The app quits after a short video of our friend Calvin has mercifully stopped, so we can at least say that a session with Calvin is at least short. Pity it’s not sweet though.