The Charticle: Thanks to support for 11 languages, Gamevil's Monster Warlord is now generating $1.9 million a month

Ruling the roost on Google Play

Demonstrating the power of Google Play, Gamevil has announced some impressive figures for its game Monster Warlord.

Developed by Everple, which fellow Korean outfit Gamevil acquired in November 2013, the card-based RPG generated over $1.9 million in revenue during December.

The game has now been downloaded over 10 million times, with around 80 percent coming from Google Play and 20 percent from the App Store.

One reason for the success of Monster Warlord is its language support.

As can been seen in the following graph, the game is now strongly performing in the top 50 top grossing Google Play charts in Brazil, Indonesia and Russia. 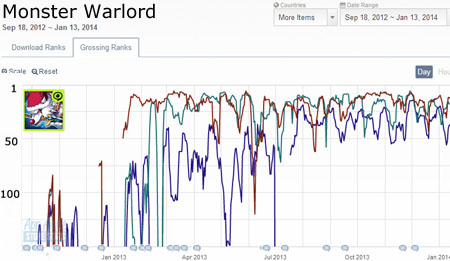 To put this - and the potential future audience - into some sort of context, the three countries have a combined population of 590 million.

Launched in October 2012, another key factor in boosting activity are regular in-game events.

This has proved particularly successful on Google Play, as can be seen in the following graph, which shows top grossing performance in Australia, France, Germany, the UK and the US. 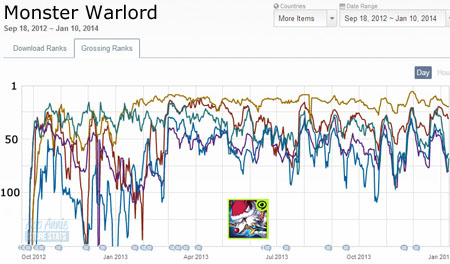 After an initial period of instability, the game has remained in the top 100 charts for each country, being particularly strong in German where it remains in the top 20.

On iPhone, however, Monster Warlord hasn't demonstrated the same revenue, although the success of the Android version in German has eventually boosted the iPhone performance to a top 50 top grossing position. 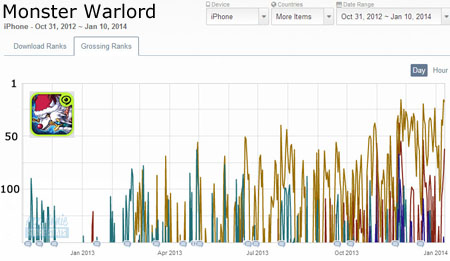 Monster Warlord hasn't caught fire in the same way on Apple devices as can be seen from this graph of top grossing iPhone performance in Germany, Australia, France, the UK and the US - via App Annie
Next Up :
Top Ten Commanders in The Lord of the Rings: Rise to War