The Charticle: Pet Rescue Saga is another jewel in King's crown

Not yet as sweet as Candy Crush but still cute

We all know about the rise and rise of King (nee King.com).

Secured on the base - and cash - of its casual online gaming portal, it's since found massive success bringing its most popular games to Facebook, and thence cross-platform to mobile.

But while its second mobile release Candy Crush Saga remains one of the top grossing global games - what of the company's third release?

Who let the dogs out?

Developed in the company's Malmö studio Pet Rescue Saga is a block-matcher puzzler that has you rescuing pets.

It's been very successful on Facebook, ranking #3 in terms of games, with monthly active userbase of around 27 million (according to AppData).

Alternatively, MetricsMonk estimates it has a ranking of #2, and 32 million active monthly players. 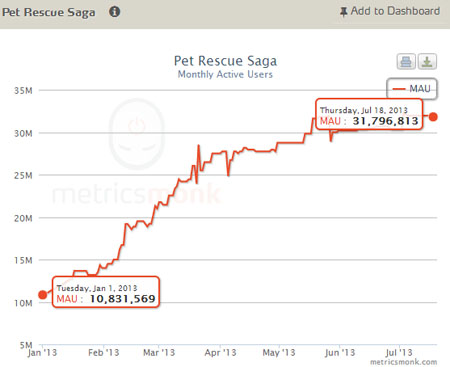 Either way, it has a lot of Facebook players, but how has this success transfered to mobile?

Pet Rescue Saga soft launched on iOS at the end of May, going global alongside the Google Play around 12 June.

According to Distimo's internal analysis, US revenue (the largest single market) has been split 60 percent on iOS and 40 percent on Android.

In terms of total revenue, Distimo reckons Pet Rescue Saga generated around $1.5 million in the US during its first five weeks.

Breaking down iOS, iPhone provided the majority of revenue; 58 percent to 42 percent of iPad. This chimes with the presentation and gameplay, which doesn't really take advantage of the iPad's larger screen.

Countries where the Android version of the game generated more revenue were Spain, South Korea, India, Vietnam, and South Africa.

What's more significant, however, is that Pet Rescue Saga is continuing its upwards march.

Its highest position on the iPhone US top grossing chart is #14, or #21 on iPad.

And it's done much better on Google Play, 'peaking' at #5 top grossing. 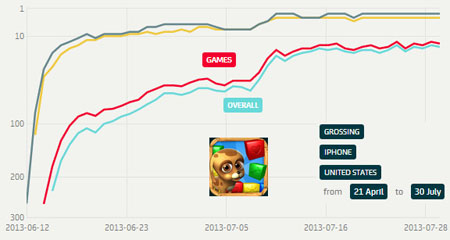 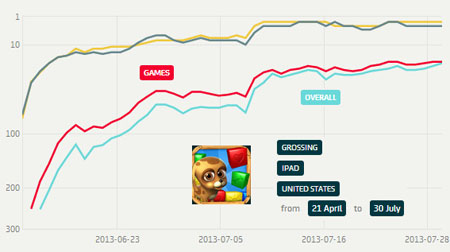 (Indeed, looking at PocketGamer.biz's own (quick and dirty) Monetizer metric, Pet Rescue Saga ranks 0.08 for success on Google, compared to 0.01 for iPad and 0.03 for iPhone.)

However, it's very unlikely these 'peaks' will be the game's highest position over its lifetime.

As daily revenue estimates from Distimo's new web analytics platform shows, the game has seen strong, rising revenue over the past two weeks.

So while some commentators have suggested Pet Rescue Saga doesn't match up to King's previous releases - notably Candy Crush Saga - this isn't something demonstrated by the numbers to-date, at least in terms of commercial success.

Methodology:
Distimo AppIQ provides download and revenue estimations for any app worldwide, based on daily sampling of transactional app data (>3 billion downloads / quarter) and publicly available information. When calculating downloads and revenues for individual apps, Distimo's unique methodology excludes that app's transactional data from the analysis to preserve the confidentiality of their users' data.
Next Up :
Top Ten Commanders in The Lord of the Rings: Rise to War