The Charticle: Jelly Splash for KakaoTalk

Can it match its US success in Korea?

As we discussed a couple of weeks ago, getting a game released on KakaoTalk in Korea is not always the gateway to success.

There are too many games being released too frequently for the mobile messaging platform to be a silver bullet for games as it was nine months ago.

But that doesn't mean that some games can't make the most of the platform's extreme virality.

Wooga's cute match-3 game Jelly Splash was a smash on Facebook before heading to mobile.

And now the German publisher has released a special version for the Korean market.

As well as integrating the Kakao social network, it's also has new sounds effects, achievements and emoticon sticker packs. Of course, there's been text localisation too.

Further backing the game's release was a marketing campaign within Gangnam Station and other popular trail route into Seoul.

In terms of the game's performance with respect to downloads, it peaked at #11 on the Korean App Store for iPhone around week after launch.

Since then, its position on the download chart has dropped steadily. It's currently just inside the top 100. 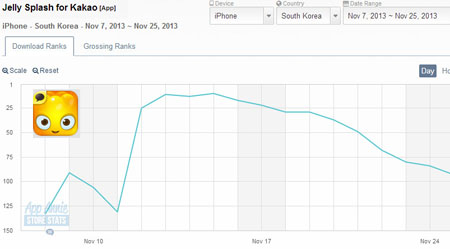 There's better news when it comes to its top grossing performance, however, with IAP revenues continuing to increase.

Jelly Splash for Kakao is currently at #69 in the top grossing iPhone App Store chart. 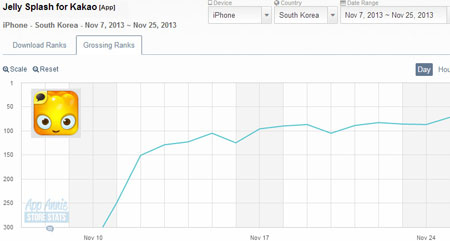 The game has a long way to go to match its performance in the key US market, however. There, it's remained in the top 40 top grossing chart for iPhone since early September. 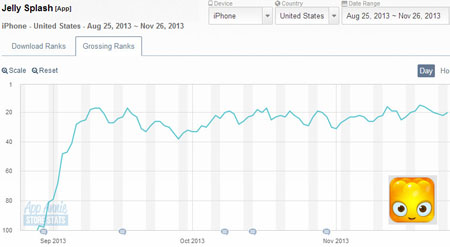 Jelly Splash's top grossing performance on the US iPhone chart - via App Annie
Next Up :
Best upcoming mobile games in 2021