Stateside: Why playing the ethical card in the F2P debate is a dangerous game

All of mobile is a little bit murky

Typically, whenever free-to-play ethics are discussed, they're framed in a way that positions free-to-play as the black sheep of the family – an unethical practice that cowers in dark corners while the paid game model stands tall.

Not everyone feels this way, however.

For those who make the case for free-to-play, it's the paid model that's arguably more unethical. Paid games ask consumers to part with their cash more often than not before they have any idea whether the game in question is worth it or not.

Based on the limited information that customers have beforehand, they may wind up buying a game that doesn't live up to the standard they were looking for. They're powerless to do anything about it though, given the money has already been drained from their account.

By contrast, free-to-play ensures that a person who plays a game knows that they're spending money on something that they enjoy because there was no monetary cost to start. In short, it's more ethical because there's less potential for fraud.

The flag-carrier for this particular take on the debate has been Scattered Entertainment's Benjamin Cousins - anyone who follows him on Twitter knows that he brings up the topic regularly, and his GDC talk on the ethics of free-to-play was as thought-provoking as you'd expect.

"It's extremely easy to bait-and-switch customers when they aren't even allowed to play the game before committing to spend," detailed Cousins in a recent tweet.

And he's not alone in this line of thinking.

Butterscotch Shenanigans, creator of Quadropus Rampage, has tried both free games and paid games. Free games have allowed the firm to carry on and, as such, studio game programmer Seth Coster has pitched picking up a free-to-play game as a preferable experience.

"So when you spend your cash within the game on a level pack, or coins, or whatever, you have a pretty dang good idea of what that money is going to bring you," he detailed.

"You're entering that in-game store with both eyes wide open. 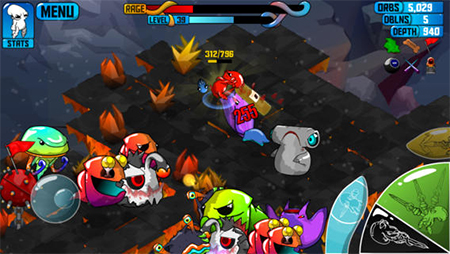 "The same can't be said for buying an entire game up-front. If you knew exactly what you were buying before dropping the cash on a pay-up-front game, how often would you still go through with the purchase? As it turns out, only about half the time."

But, if you're a developer working on paid games, should you nullify this criticism by offering players a demo? According to an EEDAR study, game demos can hurt sales by as much as half.

As such, doing the 'right' thing appears to be something of a risk for developers. Why were so many people opposed to the Ouya's "everything has a free version" model? For the exact same reason, with the addition of unsatisfactory conversion rates.

In short, demos and free 'lite' versions are great for consumers, but they don't translate to sales for developers. The former are the more important group though, right?

So, do I fully subscribe to the theory that free-to-play is more ethical than paid? Surely I've made the case for such a line over the course of this column? I must be 100 percent behind it, right?

Well, not really, because when you leave the confines of the pages of PocketGamer.biz, it's far harder to defend.

Let's start with one of Cousins' lines of attack, where he talks about how paid games can obscure their true nature: "Even when giving playable demos or previews to press, you can caveat the journalists - tell them stuff will be fixed to avoid questions," he said, once again on Twitter.

Well, free-to-play games can do this too. My demo of The Drowning at GDC 2013 – run by Cousins himself – gave me a far more positive take on the game than I felt after sinking time into it independently.

Flaws with the game's controls and structure were only apparent after putting more time in than the guided half-hour demo I was given last year at GDC.

But this is emblematic of the process that successful free-to-play games use. They introduce elements early on to condition the player to satisfy them right away, and to expect a certain experience with how it progresses and how they are meant to play.

These methods eventually will mean spending money, because the rules eventually change. And how fortunate, players are allowed to spend infinite amounts of money, as few games make it possible to not do so.

And why do many games not have a demo? It's not for fraudulent reasons, but because – unlike The Drowning – sometimes a half-hour slice of a game just isn't long enough to decide if the whole thing is worth it.

Paid games - especially the ones created by developers who defend the model - generally make their deal clear. Pay x, get y, and maybe there will be optional downloadable content.

The player might not like it after they play it, but they know how much they spent going in.

Free-to-play's deal is murky and unclear because the value of what players are spending money on may be known in the literal sense, but a purchase early on may not bring the same value as a more expensive purchase later on - and the most successful games are built this way.

This whole trend is even worse with paid games that use consumable microtransactions. It can be tempting to build a game with them that then is meant to get players to spend more to keep enjoying what they paid for.

So, what's my conclusion? The melting pot of ideas that is modern day mobile means developers are making money from games in ways that simply hadn't been considered before, and whether you're a free-to-play studio or you've stucked by paid, chances are there's at least some shades of grey in the way you're monetising your game, as I've tried to detail here.

Paid games can 'defraud' the player by not being worth the money, or they can be worth so much more than that initial cost.

Free games can be valuable in giving players the ability to choose their experience and spend as much as they feel the game is worth, or they can use the kinds of psychological tricks that also power gambling addictions, and enable self-destructive behaviour.

In the past I've argued that free-to-play developers need to define ethical codes of conduct and to regulate themselves specifically because of legal and regulatory scrutiny. It hasn't slowed down in the last 6 months since I wrote that feature with more lawsuits and governmental bodies chiming in.

While perhaps on paper we can argue the ethics of free-to-play versus paid games, we have to realise we're talking about a relatively new business model versus the millennia-old model of spending money to get functional ownership of a thing.

Chicago-based Carter Dotson is a senior writer at 148Apps.com, which was acquired by PocketGamer.biz publisher Steel Media in 2012.
Next Up :
The benefits of accessible mobile games for the blind and visually impaired community