Opinion: What's next for Glu Mobile?

It's the final countdown

Over my years as a mobile games journalist, I've always looked to Glu Mobile.

Partly it's because the pure-play mobile company is on the Nasdaq stock exchange (NASDAQ:GLUU) and hence has to reveal detailed financial information every three months.

But, in addition, it's a medium-sized company (with annual turnover in the order of $100 million) that has constantly been battling market conditions.

Smaller companies would have shut up shop or been acquired.

Glu has been big enough to have weathered loss-making quarters for years, even raising additional cash and making its own substantial acquisitions.

Bigger companies would have had the scale not to worry about market conditions.

But not even big companies live forever.

Twelve months ago, Glu was on the rise.

Although still loss-making, on the back of two years of growing sales its share price was over $5, valuing it at $375 million. 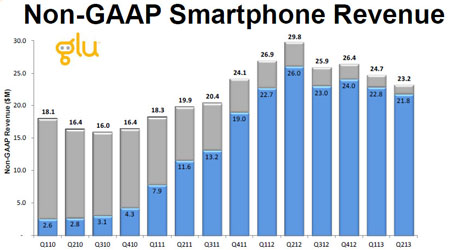 Glu's rise and fall as shown in its quarterly sales

Now, however, the past two quarters have seen sales decline year-on-year and losses widen.

Glu expects to end its FY13 financial year with just $9 million cash (down from $19 million today, and down from its prediction of $14 million at the start of 2013).

So I can't help but wonder if time is finally running out.

Eye of the storm

The problem is Glu has proved to be too big to be truly agile but too small to have the benefits of global scale.

And the market is moving faster than anyone can imagine.

Back in the day, Glu was successful making Java and Brew games often based on movie licences and sold through carriers' on-device decks.

It took time for the company to rebalance its operations to react to the rise of the Apple App Store. By the time it had done that the market had moved on to Android and free-to-play gaming.

Niccolo de Masi joined the company in January 2010 as its new CEO, with a vision of making Glu a purely free-to-play company.

In this he has succeeded, building a strong growing F2P games business. 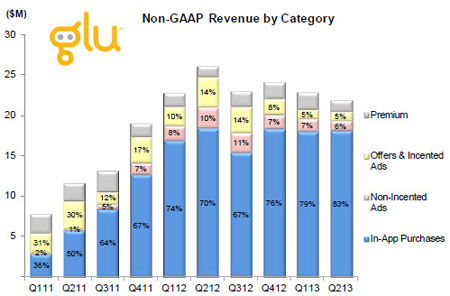 Glu might have even had some profitable quarters in 2012 if Apple hadn't stamped down on incentivised monetisation techniques hitting sales by millions of dollars.

Glu can't just blame outside forces for its problems, though.

It set up a third-party publishing division in 2011 only to shut it down months later, instead doubling its internal development headcount (and costs) through share-backed acquisitions.

Yet as the app store ecosystem has become focused on single big hits - companies such as Supercell, King and GungHo only have a couple of very high grossing titles - this sort of mid-scale approach hasn't worked.

In response to not having a big hit, Glu has since cut back on its internal teams, switching back into publishing mode, which is cheaper, albeit with less upside.

But let's get something straight. I'm not nailing Glu into its coffin... yet.

It has six to nine months (two or three quarters) to demonstrate it's moving towards back to growth and profitability, or it's going to run out of cash.

Of course, with hit games now generating millions of dollars a day, it only needs one hit to be fine and dandy. According to its most recent financials, Glu will launch six more titles in 2013 with at least 12 in 2014.

It's also pointing to its ability to better monetise its existing games and franchises.

The company is pushing heavily in Asia, especially Japan and Korea too. 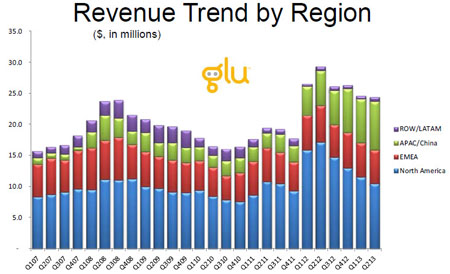 Will the APAC region (green bar) save Glu?

De Masi says that a combination of the two - Asia and better retailing - has the potential to double Glu's revenue over the next 18 months.

Sadly, the vital timeframe is now limited to the next nine months.