Opinion: Nintendo demonstrates that if you can't accept mobile games, any old fugly wedge will do

Defensive move is more about 3DS than market success

I've got an original DS, a DS Lite, a DS XL, and a 3DS - none of which have been switched on, let alone played, during the past two years.

Still, I'm not a critic of CEO Saturo Iwata's decision not to make games for phones and tablets.

While I've argued strongly that Nintendo doesn't realise how much of its core audience - especially in terms of portable gaming - it's lost through that decision, the decision itself is one that any Nintendo CEO would make.

The bottomline is it's almost impossible to imagine a free-to-play version of Super Mario Bros. and that's what Nintendo would have to do if it wanted to compete with the likes of Supercell, King and GungHo Online.

Which brings us to the 2DS.

As any poker player knows, you have to play the hand you're dealt (or fold), and with the 2DS we can see exactly how weak Nintendo's hand now is.

Launched in the afterglow of the rise in 3D movies and 3D TVs, the gloss is now off the 3D experience. The 3DS has been a relative successful console (at least compared to the PS Vita), but no one cares about the 3DS effect.

Of course, Nintendo can't (yet) say 3D has been a flop, so it's come up with clever combination of dropping the technology as part of a 'cost-cutting measure' that also sees the portable losing its clam-shell hinge, redesigned into an ugly wedge of a console.

Not that one, grandma

By focusing attention on the new physical configuration - which granted may be slightly cheaper to manufacture - Nintendo has cut its entry-level price by $40, while differentiating its product line in a smart way.

For one thing, $40 isn't a lot of money, and for another the 2DS is almost purposely fugly. Who's going to want to get one of those for their birthday? 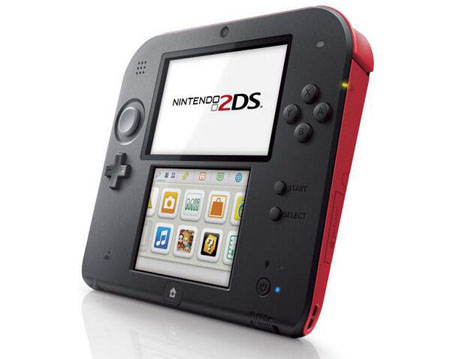 In this way, Nintendo not only gives itself future wiggle room in terms of further reducing the price on the 2DS, but also reinforces the 3DS as its premium-priced product.

Elephant in the room

The problem is that the move is purely a defensive one; it protects the 3DS while positioning the 2DS as slightly more of an impulse purchase; at least as much as a $140 spend can be an impulse.

Nintendo could give away the 2DS for free with Pokemon X and Y and it wouldn't solve its fundamental problem, because for the first time, install base isn't its problem.

I mean, I've got four DS consoles and probably will buy the 2DS but it doesn't mean I'll be playing them for even a second.

No. Forget hardware. Getting gamers to play its games is where Nintendo needs to focus its entire attention. That is the battlefield on which the company will now live or die.