How to make the most of Android's dramatic rise in Asia

Do you have friends in the right places?

As ever, the latest Q3 2013 numbers released by App Annie make for interesting reading.

They tell a story that has been apparent for some time now: while Android is leading the way in terms of downloads, Apple remains far ahead in terms of revenue.

But that story gets a little more interesting when you look a little more deeply at the numbers. What it shows is that there is an increasingly attractive opportunity for developers who are willing to focus on Android development. 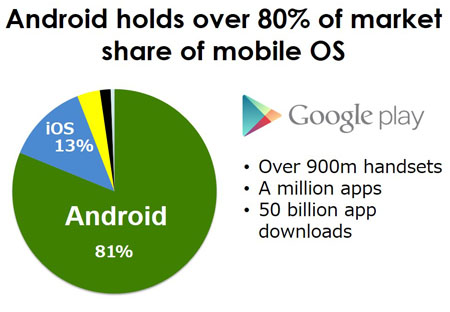 It’s revealing enough that round after round of handset sales figures show a repeated shift away from Apple towards Android. But on top of that, in many markets, Android revenues are catching up and overtaking iOS.

It has now reached the point, in Japan, where Android apps generate more revenue than iOS; in Korea the difference is even more pronounced, with Android outpacing iOS by quite a distance, and in Taiwan Android revenues are comparable to iOS.

If you look at the revenues generated by individual apps, the top hundred or so grossing apps on Google Play in Japan and Korea outpace their counterparts in the US, whether those US apps are on Android or iOS. 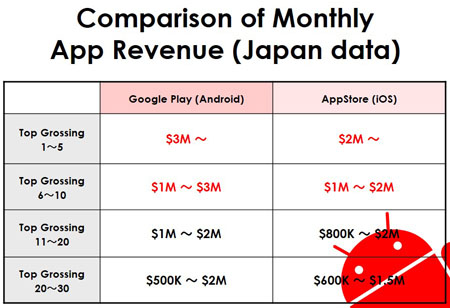 So if you take a truly global view of the major app stores, the US is increasingly looking like an outlier

That growing discrepancy between the US and the rest of the world is another interesting story.

If you look at some of the other data released recently by App Annie, it shows that there are a lot of western publishers doing well in terms of downloads: companies like Electronic Arts, Gameloft, Glu Mobile, Storm8, and Disney.

But when you look at those publishers who are doing well in terms of revenue, it is, again, Asian companies and western companies who are focusing on Asian markets: companies like GungHo, CJ E&M, LINE, King, COLOPL, and Kabam. 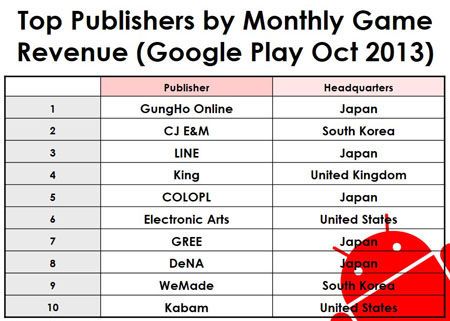 In terms of revenue, Japan and South Korea are the most lucrative Google Play markets in the world, with Taiwan close behind in fifth place (after the US and Germany).

More than 9 out of 10 handsets in Korea are Android; it’s about 80 percent in Taiwan, where the most successful games are making upwards of a million dollars a month, and where even outside the upper echelons of the revenue charts, moderately successful games can expect to make $300,000 a month. 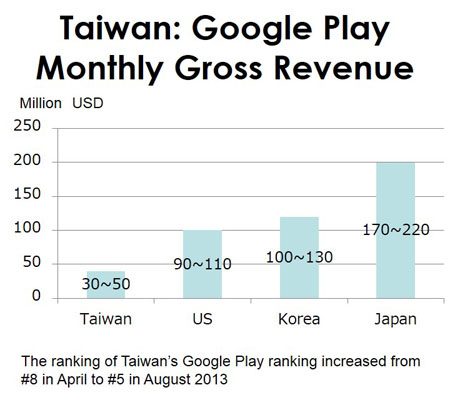 And it seems that western developers are beginning to take note. It probably hasn’t escaped your notice that companies like King and Supercell have managed to translate their success into a whole lot of different languages, but it might be worth thinking about exactly how they managed it.

One of the beauties of mobile development is that the market is truly global - but to be truly successful takes more than just ticking a checkbox. 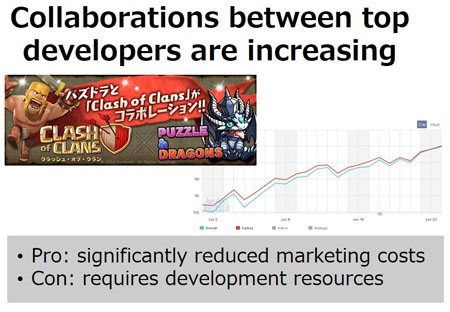 In the case of King and Supercell, both have employed keenly focused paid promotion to acquire users across Asia, and both enjoyed a surge in their Japanese rankings after localizing.

Crucially, they also engaged in key collaborations - Supercell with GungHo in Japan, and King with Kakao in Korea.

Having a key partner who can help you understand the nuances of local markets is a huge advantage.

Anybody with their ear to the ground should be aware of LINE’s surge to prominence (eg. 49 million users in Japan; 17 million in Taiwan); but only someone who has been paying careful attention will understand how the success of games like PokoPang and LINE POP has opened up the Japanese market away from the traditionally successful card battle games and towards a more casual, accessible experience.

In Korea, meanwhile, as King has discovered, just about the only reliable route to success is via Kakao, whose name is currently attached to most or all of the top 10 grossing games there and whose emergence as a social platform has driven up the revenues of top grossing games tenfold.

If you have the money to run paid promotion, then a local partner can help you factor Asia and Android in from the start so that you’ll benefit from the additional visibility on the New App ranking. If you have a slightly lower budget, they can help you utilize a mix of install sources so that you can maximize, and sustain, your app store rankings without wasting it.

And if you have no meaningful budget at all then they can help you find free or low-cost cross-promotion strategies and ways to enhance the virality of your game. 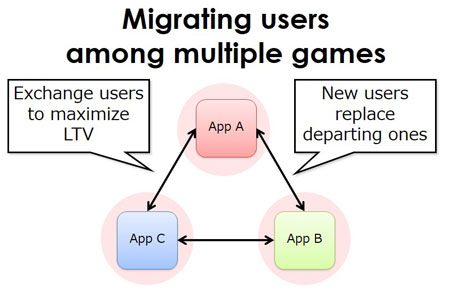 There’s no doubt that things are tougher now for mobile developers than they were in the heady early days of the App Store, when pay-to-play thrived and user acquisition strategies sounded like something out of Dope Wars.

But for developers who are willing to cast their ambitions a little wider - willing to look beyond the iPhone, and to look across to Asia - there are still a lot of opportunities around.

You can find out more about Metaps via its website, as well as checking out its Slideshare presentations.
Next Up :
Best upcoming mobile games in 2021