Chart of the Week: Mobage wags its long tail

A third of MobaCoin consumption from pre-2010 titles

Popularised in media terms by Wired's Chris Anderson, there's been some debate about the power of the long tail for mobile games.

Of course, running games as a service means that developers are thinking a lot more about the longevity of their games and their communities.

The top grossing charts are now pretty static in terms of titles sitting in the top 50, however, meaning they're sucking up the vast majority of revenue.

Still, it could be argued this is more about the power of a mass-market than a long tail.

Remember that the classic long tail is all about selling a small number of hard-to-find (hence valuable) items; i.e. maintaining a valuable niche market, not a mass-market.

If the figures from DeNA are anything to go by, the long tail is certainly working for its Mobage platform.

Revealed as part of its Q1 2013 financials, this graph demonstrates that in its key Japanese market, the longevity of games can be measured in years. 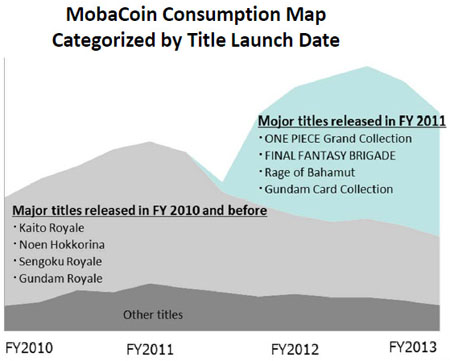 As shown in grey, around a third of current consumption of the platform's MobaCoin currency (worth around $550 million per quarter) is being generated from games released in 2010 and before.

Difficult for even the largest publisher to match in terms of the sheer scale of titles required, it shows why a successful platform is worth ten of billions.