Battle of the platforms

Organised through mobile ad network Ader's 7X24 platform, the respondents - who access the internet via mobile and tablet devices - were quizzed about a bunch of topics.

How do your gamers game?

When asked what they usually do with their mobile device, communications - notably instant messaging (70 percent) -was highest, followed by news (60 percent) and online music (56 percent).

Online gaming was ranked fairly low at 31 percent - around the same level as online banking or email.

But when asked about mobile app usage, games came out at 65 percent, second only to social communications at 77 percent. 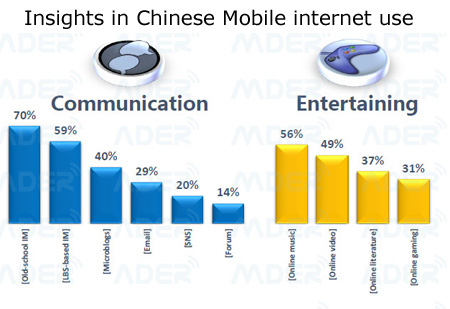 It's a marked difference given that the 'mobile gaming' was the end point of each question, the only difference being the path to it. Of course, Chinese mobile users prefer not to incur high data costs so always-on online games (whether web or app-based) are not popular.

Yet, in both situations, it's also clear to see that the combination of games and social communications will be an explosive combination; something that the market is looking to as Tencent commercially launches the game platform element of its WeChat social messaging service.