Regardless of whether or not you’re a fan of the genre, it’s undeniable that mobile has done wonders for board games; household favourites like Monopoly and Cluedo currently ride high in the app store charts, whilst lesser known but equally enjoyable titles have been given a new lease of life. Farkle Safari is a perfect example of the latter.

Having recently launched worldwide for iOS and Android devices, a new generation of players can enjoy the classic dice adventure game by testing luck against the game’s numerous NPC opponents, which don the form of various exotic animals from across the world with their own unique personalities and playing styles.

Those who haven’t played Farkle before needn’t feel intimidated as it’s incredibly easy to play. All that’s required is to take turns with your opponent to roll your dice and try to hit scoring combinations (1s, 5s, triples, and other special scores), to achieve a specific total and win the match. You can also collect custom dice sets and make use of special powers when the game isn't going your way, such as the ability to undo a throw or go on a lucky streak with Lucky Hot Dice. There are also a number of trophies to obtain by achieving certain goals.

We caught up with Polyworks Games, the developer behind Farkle Safari, to find out what went into making this thoroughly enjoyable adaptation.

What do you think Farkle Safari offers that you can’t get from any other title on the App Store?

The ability to play Farkle in a unique setting against various NPCs with their own unique personalities and playing styles. Farkle Safari adds the "adventure" aspect of multiple opponents and progress through a map of locations.

I've seen plenty of Farkle games, mostly with a "casino" type setting. Many of them pair the user with other players, which is great if you have an internet connection. I wanted to make a Farkle game that was self contained. Farkle Safari evolved from this idea. Rather than have just 1 "dealer" that the user plays against, we expanded the game to include the animal's personalities, playing styles and multiple locations.

Creating the individual personalities was the biggest challenge. I wanted to make sure that each animal was unique. The trick was to wait and do one personality a week. This kept me from rushing through the completion and taking short cuts. 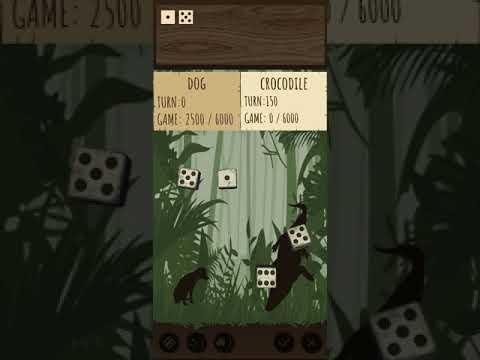 Subscribe to Pocket Gamer on
What aspects of Farkle Safari do you feel audiences will be most excited about?

Anyone that is a fan of goofy puns should have a good time. Also, the addition of "powers" (undo and lucky hot dice) and the trophies and custom dice sets. I feel that these help give the game more dimensions and diversity.

The Bat and Dolphin characters are my favorites. I like the design and artwork of the game--I feel that it makes for a different experience.

Farkle Safari is a free-to-play game currently available to download from the App Store and Google Play. The game features optional ads and in-app purchases, from which 10% of all proceeds will go to animal conservation charities like the World Wildlife Fund and the Rainforest Action Network.

What's A Preferred Partner Feature?
From time to time Steel Media offers companies and organisations the opportunity to partner with us on specially commissioned articles on subjects we think are of interest to our readers. For more information about how we work with commercial partners, please read our Sponsorship Editorial Independence Policy.
If you're interested in becoming a Preferred Partner please click here.
Next Up :
Definitive Apple Arcade games list - Every available title so far