App Army Assemble: End Matter - Should you hop into your spaceship and tackle this stylish battle sim?

End Matter is a real-time space battle simulator that sees you conquering new planets before defending them from other players. There are a bunch of additional game modes to dive into as well once you've tackled the 40 levels in the base game. With so much content on offer, we decided to send in our App Army to see what they made of it all.

A very simple game where you control your colony of ships and use them to infect other planets. You control the number of ships to move around and whether you want to use any special attacks to do so. It can be challenging to see all the fine details on a small screen, so an iPad would be a better screen to play on. It’s not a game I would say I would keep coming back to. A multiplayer feature would be a great addition to the game and keep things more entertaining.

End Matter is a game that can be described as minimal, and when played on a large canvas device it looks even more so. It’s a game that I can’t put my finger on if it’s a puzzle or a strategy simulation. It’s a level-based game where you have a starting planet and a fleet of ships that can be used to take over other planets and forces whilst defending your own until you eventually are the victor.

The graphics are minimal and probably one step away from it being a text-only affair, basically, just enough graphics to be functional. You deploy your ships by dragging from the planets where your forces are to where you want them to go, and then select how you want to deploy them from the selector that appears. At times I felt I was fighting against the UI and my natural urges to interact with it differently than it expected, but like the graphics the controls are functional.

There may be a benefit in giving the player some colour or control tweaks to make the playfield easier to navigate and read as I feel both could do with some fine-tuning. I can see a lot of people being put off by the look and gameplay, but I can equally see quite a few people enjoy it and its small levels enable you to jump in and out for a quick game whenever the urge takes you. It’s a game that benefits from Google Plays ability to buy the game and refund if you don’t like it as I think you will know right away if it’s for you and if it is, you will get a lot out of it for your money.

There is nothing in particular wrong with this game. It works as expected, the graphics are fine, the controls are okay. It just isn't enough for me. I'm sure that the strategy is deceptively simple and gets deeper the farther you get in, but honestly, there just isn't anything here to distinguish the game. It doesn't have a real defining quality that I can lock on to. It's a perfectly serviceable strategy game, but I didn't feel compelled to keep playing it. There just isn't enough here for me to recommend it, particularly when it costs money.

End Matter is a deceptively simple game where you take over planets by moving ships from one planet to another. The tutorial is brief, showing you how to move your ships and make more. And then warns you that there is more to learn. Graphics are simple but effective. The more you play the more strategy opens up, such as using special weapons or deciding if to send all at once or move ships gradually. It’s a give and take to defend or attack. A very enjoyable strategy game, though fairly brief 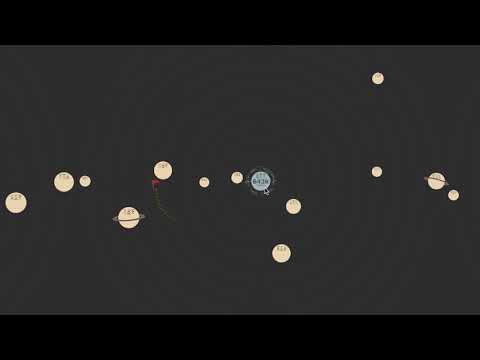 The premise of End Matter is, with your ships, conquest different planets, with the mission to destroy the enemy. It’s a similar game to Galcon, a concept that I really like, but with more options to achieve the conquest of new planets, like lasers and teleporters. This game is played in portrait mode, which is nice for playing on the go, but I would like the option to play on horizontal mode, to better see the map.

Sadly, this game didn’t get me going like other games, it doesn’t feel as attractive as the original Galcon, but I really enjoyed the retro atmosphere and the colour palette. The games don’t get hot on my now old phone hot, which is also appreciated. In conclusion, End Matter is a game with a lot of potential, but the “mystic” is missing to be a game you can really remember.

This is a pretty straightforward game. The object - to invade planets and eventually rule the galaxy. The mechanics of the game are easy to pick up through the tutorial, but despite tweaks to the gameplay as I progressed, I found it rather repetitive. The graphics are very plain and a little more colour would have been welcome.

I didn’t feel it was a game I could have played in long stretches, but It was okay for when I had a few minutes to spare. I probably won’t be playing End Matters every day, but I will keep it on my iPad for when I have a bit of time to squander. It’s not a great game but it’s not bad either.

The plot of the game is very simple: destroy the enemy and colonize the galaxy/sector you are currently in. It reminded me a lot of Auralux, but with added controls and actions besides moving your fleet from planet to planet. I recommend checking out the tutorial, as some of the controls are not as intuitive as they should be. My favourite part of the gameplay is that each planet comes with uniques boosts, either in resources (number of ships), attack or defence. I appreciated the minimalistic look, even though it is not super polished as for other minimalistic games I played. Overall, I think it’s a nice game to play when commuting or just to spend a little bit of time.

Not my usual choice of the game so took a little getting used to it at first, I think Mega-lo-mania on the Amiga was the last comparable experience! The game has you balancing defending and attacking other races whilst trying to continually conquer more of the solar system. It's fairly simple to pick up and then becomes more strategic as the difficulty ramps up. I would definitely say it's not the prettiest game, not good looking or stylised in any way.. just bland and beige.

Whilst this was initially quite off-putting the hook of one more space battle kept me coming back for another go. I think I would have preferred some more visual indications of the planets current player strength as during the heat of a large scrap I did misread the numbers on a few occasions, maybe change the colour of the font green/red to help indicate the status. Like others, I did find the touch screen a bit hit and miss which did lead to a few frustrating moments but overall it did not impact too much on the experience. Needs a bit of colour and life injecting into it for a full recommendation, but still a nice enough time waster.

End Matter is an arena-style space battle sim that is custom designed for mobile gaming. To start off, I recommend checking out the quick tutorial that gives you the gist of the basic gameplay. This game features short but sweet strategic play sessions with the main goals of conquering new planets and defending yours from the enemies you encounter. Minimalist is the perfect way to describe End Matter.

From its handful of colours to its clean almost retro graphics, and its outer space atmospheric sound effects, this purposeful design works great for a more casual mobile experience. As you progress through the campaign you’ll rank up and unlock new modes and some really cool weapons to help you along your space journey. There’s even a custom game mode for those who like to switch things up a bit. I really enjoyed my time spent amongst the aliens and I’ll be back to dominate the universe.

There is no point in beating around the bush as End Matter is basically a reworking of Galcon with a few extra options. On your campaign of conquest, you will send your fleets of ships over other planets, every planet conquered will start auto-generating spaceships which can be used to take over other planets. The simple numbers annihilate of Galcon is given a twist with options like laser and teleport to reduce enemy spaceships.

As you play you earn mods that change the gameplay, one of the early levels is turned into noughts and crosses. The graphics are very beige and the sound does the job. However, touch screen controls can be glitchy when trying to zoom in and out of the playing field. Still, it’s a good time waster, the extra options and mods add variety to the gameplay so it’s getting a recommendation from me.

Next Up :
Total Football: 4 Reasons to play this realistic football sim