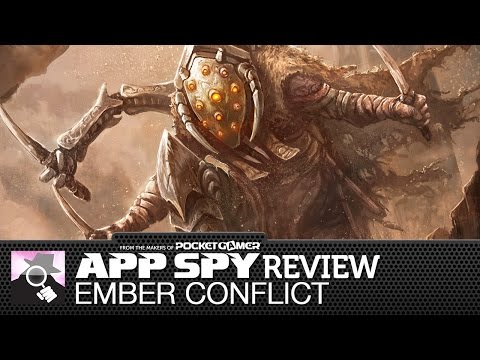 Ember Conflict sits somewhere between a small midcore RTS and a MOBA on the strategy scale. It's not particularly dense, there's no base-building, and the only control you have over your units is where they go.

It might not offer the depth of a classic RTS, or the competitive edge of a MOBA, but there's enough here that you're likely to enjoy the time you spend in its little skirmishes.

There's a story going on in the background, but it's not all that important. You're left in charge of a small band of warriors, and need to use their assorted skills to mash some other, naughty warriors into pieces.

You begin with a couple of warriors, adding archers, healers, tanks, and lava gobbing siege monsters to your ranks as you get deeper into the game.

Different fighters have different skills, but you can't really tell them what to do in a fight. Once they're close enough to an enemy they'll start fighting.

You can withdraw them if it looks like they're going to lose, but what follows is a Benny Hill-style chase around the map.

You can win a fight by defeating all of your foes, or capturing the nodes spread out on the map. Some maps don't have these, so you just need to smash faces and hope yours remain relatively un-smashed.

Fights are brief, but there's a decent layer of tactics here, thanks mainly to your reinforcements. You start with a trio of brawlers, and as a bout goes on you can call in extra units to strengthen up your army.

There's the usual social aspect here as well, with tournaments and asynchronous co-operative multiplayer thrown in as well. Also there are some adorable pugs scuttling around for some reason.

Ember Conflict isn't the most in-depth game out there, and there's a lot of grind if you're not willing to pay for IAPs. But there's still a nice beat to the play, and it doesn't demand too much of you if you don't want to give it.

It might not be as revolutionary a step in the mobile RTS as it likes to think it is, but there's a polish here, and a certain amount of simple fun, that make it hard to ignore.

It might not be the great mobile RTS we've all been waiting for, but there's enough in Ember Conflict to make it worth a look
Next Up :
Otaku's Adventure mobile review - "A truly bizarre love triangle"

Rangers, shield bearers, and pugs: your first glimpse of The Ember Conflict