The Dynasty Warriors franchise sets it stock out in a couple of ways. First there's the massive battles. Then there's the story set squarely in a fantasy retelling of Chinese history.

And you know what, Dynasty Warriors: Unleashed has both of those things. There are a huge number of enemies to smash into little bits, and a whole bunch of heroes from the three kingdoms to collect.

The whole thing is wrapped up in a pretty standard free to play ARPG system, which is likely going to make diehard fans vomit out gouts of rage like no one's business.

But I'd suggest giving this one a go. After all, Dynasty Warriors has always been about mashing buttons and watching things die. And Unleashed has that in spades.

The game sees you working through a series of small-ish missions. You murder a bunch of grunts, take on a mid-boss or two, and then move on to the next challenge.

And it's all quite a lot of fun. The game is sort of reminiscent of the Dungeon Hunter series. The view is reasonably high, and you can play around with it by tapping a camera button. 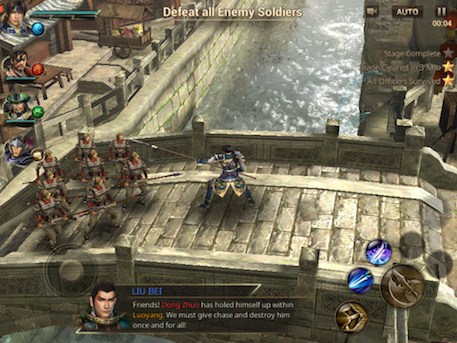 The controls are solid. A joystick on the left controls your movement, and a collection of buttons on the right lets you whomp things.

You've got special moves on cool downs, a dodge (also on a cool down) and a super special move that charges up as you attack.

You take three characters into battle, and you can swap between them with buttons near the top of the screen. There's a rock-paper-scissors style strengths and weaknesses scale for characters of different elemental hues, so having a good mix is key.

When you're not fighting you're going to spend a lot of time trawling through different menus. You need to strengthen your weapons, your armour, and your generals. It's not the most intuitive of processes, but once things click you'll understand them pretty easily. 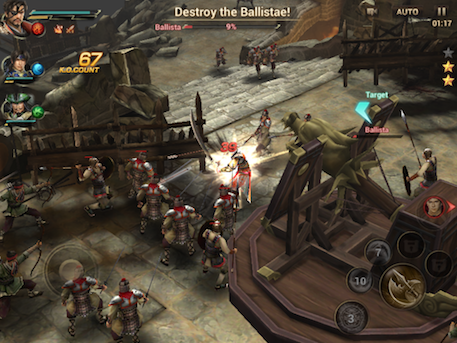 The violence itself is fast, although on older devices you're going to have to deal with slowdown. There are a ridiculous numbers of troops on screen sometimes, and things can chug along.

There's a story here as well, but you don't have to follow it if you don't want to. Which is good, because I didn't understand most of it.

Is Dynasty Warriors: Unleashed a mobile game worth the name then? Well, yes and no. It's very much a mobile game, with all the accoutrements that comes along with that. But at the same time it's a lot of fun.

It's stompy and smashy in just the right ways, and the monetisation isn't going to get in the way too often. It's not perfect, not by a long shot, but you'll slice through armies with a grin on your face all the same.

A pretty impressive mobile adaptation of the series. The monetisation might upset some, but look past that and you'll have a lot of fun
Next Up :
Netflix Desta: The Memories Between review - "Pass the ball and conquer your dreams"