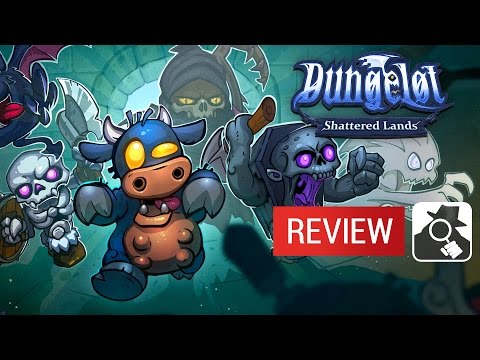 Subscribe to Pocket Gamer on
Dungelot: Shattered Lands continues in the same roguelike vein as its predecessors, but it dribbles a thick gloop of new polish, and finishes the mean pudding with a hateful challenge cherry.

This is a tough twist on a series of well established mechanics. A dungeon crawling smash and dash mixed with a life and death juggling act. With a bit of Minesweeper thrown in for good luck. Or bad luck.

And it all gels together brilliantly. Even when you fail you'll want to try again, figuring out where you went wrong, and trying to push yourself that little bit farther through the grim undercrypts you're fighting through.

So what's the deal then?

You play an adventurer who sets out to loot, smash, and generally mess up some dungeons. Each dungeon is a grid of un-revealed squares. There are some around the door you can tap to clear, and these open up more avenues of exploration.

The squares you tap on will often have things underneath them. Sometimes it's loot, or a lump of food to stave off starvation. Other times it's a slobbering monster intent on your downfall.

Revealing a beast locks up the squares around it. You don't have to fight them, but often you'll find yourself with no choice. You need to kill to progress.

Each level holds an exit, and a golden key you need to find to open it. Sometimes you'll find it early on and be able to escape, other times it'll be in the last square you tap and you'll have to kill everything to get to it.

There are buffs and de-buffs that appear too. Sometimes levels will have skeleton snipers, or be polluted with dragon gas.

Other times you'll awake ancient guardians who hurl rocks at enemies when they're detected, or stumble across a dwarven mine that makes the gold you collect worth more.

I'm guessing this is getting recommended

It is indeed. It pushes the series on in a multitude of interesting ways, while still retaining that core compulsion loop that makes death more of an annoyance than a full stop in your exploration.

There are some thick RPG elements, new characters and areas to unlock, and a sharpness to the play that means you need to think about each battle carefully rather than just jumping face first into a monster's attacks.

Plus it's a premium game, and while you might occasionally get frustrated at the slightly peaky difficulty spikes, there's still a massive amount of fun to be had in these subterranean depths.

A brilliant roguelike with a finger in a load of genres that gets the balance just right
Next Up :
Valiant Hearts: Coming Home Netflix review: "A touching war story from various angles"

How to survive the depths in Dungelot: Shattered Lands - Hints, tips, and tricks

Dungelot: Shattered Lands unique brand of dungeon crawling is out now on iOS