Drop Not! review - A one-touch arcade game that gets a bit one-note

Drop Not! is a game about rolling along a series of precipitous blocks. Make one wrong move and you'll tumble to your death and get dropped back at the last checkpoint you unlocked.

It's fun to begin with, but it gets a little same-y. And there are some difficulty spikes that'll leave you frustrated unless you're willing to pay to buy more checkpoints.

There's a good, simple idea here, but in the end you're going to lay the game down a little quicker than you might have done if it had a few tweaks.

You play a cube-shaped animal, and you've got one thing to do - tap the screen. Tap and you'll turn 90 degrees to the left or the right, depending on which way you're heading. That's all there is to it.

The mazes you're rolling over start off pretty simple, and you'll find yourself making decent progress. And then the game turns the heat up.

Blocks crumble away as you approach, narrow strips of safety are bounded by the infinite abyss. Death is inevitable, especially since you're speeding up with every roll. 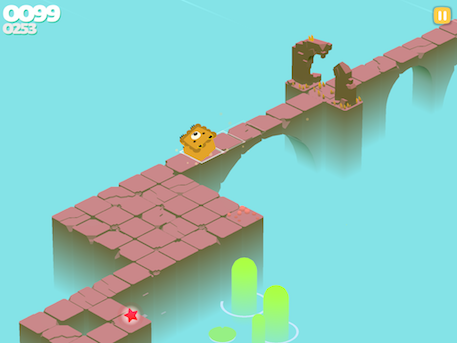 You get points for each block you move across. There are multipliers, in the shape of stars, placed around the level. Usually on paths that are more difficult to get across than the main one.

You'll pick up hourglasses as well, and these slow down your speed. Sometimes that's helpful, other times it breaks your rhythm of taps and leads to an untimely death.

And you'll find yourself pulled back to checkpoints that are long before your place of death. Unlocking new checkpoints requires keys, and they are drip fed to you as you play.

The whole thing bungles along pleasantly for a while, but cracks start to show. The compulsion loop it builds up in the earlier stages - roll, unlock new animals, get a new highscore - starts to slacken once things get tough.

And that's a shame, because Drop Not! could have been a really engaging one-touch arcade experience. Instead it becomes a chore a little too quickly.

Drop Not! review - A one-touch arcade game that gets a bit one-note

A nice idea that gets a bit lost in difficulty spikes and frustration
Next Up :
PUBG New State review - "Not-so-new state, but still enjoyable nonetheless"