Dreaming Dimension: Deck Heroes is a turn-based roguelike deck-building game. It all takes place in a dream the main character is trapped in where they embark on an adventure to become a powerful warrior by battling against a plethora of powerful enemies. 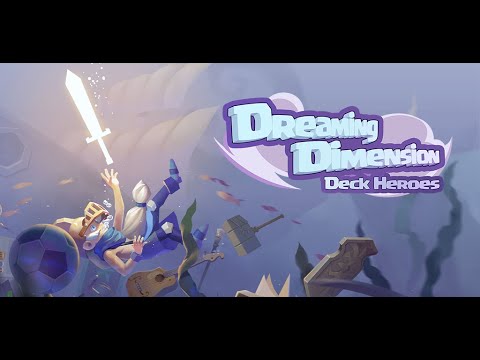 The game is roughly divided into two different sections. The first is navigating the overworld, which appears as a labyrinth where your path will be covered by leaves or snow, depending on the area, until you move onto the next square. Some of these hidden squares will be home to enemies.

This kicks off the other main portion of the game which is the combat. Here it becomes a turn-based card battler, a setup you'll likely be familiar with if you've played anything like Slay the Spire, many people's favourite entry into this roguelike sub-genre.

There will be over 500 different cards to make use of alongside different relics and equipment that will also be useful throughout your adventure. There are also four difficulties and three game modes to choose from, hopefully providing plenty of variety if you grow tired of one particular setup or find everything too easy.

There are also a variety of different heroes to choose from before you leap into battle, each with their own talents to make use of. You can check out some gameplay from Dreaming Dimension: Deck Heroes in the embedded trailer above.

Dreaming Dimension: Deck Heroes is available now over on Google Play in Early Access. It's a free-to-play game with in-app purchases.

Looking for more roguelike games to play on your phone? Here are 25 of the best available for Android devices
Next Up :
Raising Archangel is an idle RPG about making a newbie angel more powerful, available now for iOS and Android