The first DrawRace introduced the simple yet utterly ingenious concept of tracing lines to steer your car. Rather than racing in real time, your chosen vehicle follows the path you’ve laid out for it after you’ve drawn out two laps.

Your car will follow your racing line as precisely as it can, accelerating and braking according to the speed at which your fingers passed over that section of track.

It’s a surprisingly nuanced system that can produce surprisingly different results depending on the vehicle you’ve chosen. Take a turn too quickly and your car may skid or drift, losing valuable seconds.

New to the mix is the Turbo button. In the first game, you felt a little helpless after drawing your path, unable to affect the outcome in any way. The Turbo button is your way to redress that.

Rather than compromising the purity of the core mechanics, it adds a new layer of strategy, as it can on occasion be more hindrance than help.

To speed or not to speed

When you see your AI opponent racing ahead, it’s tempting to jab that turbo – but press it at the wrong time and you can easily spin off or overshoot a corner. Finding that delicate balance of speed and precision is vital – which is just as racing should be.

You’ll accelerate through the ranks fairly quickly at first, as your career eases you through Rookie class to become a true Talent. As you move through the gears onto Pro level and above, the challenge ramps up accordingly.

Each class features 12 races, with three gold medal challenges in each, representing the number of opponents you’re up against. Beating the first is usually a doddle, but the drivers on the third challenge are much savvier.

There are 36 different tracks to master, but perhaps more importantly a range of vehicles to use. Naturally you’re restricted to certain types on certain tracks (no point in attempting an F1 circuit with a rally car, is there?) but these additions only increase the tactical depth.

The pass-the-iPad multiplayer mode has been joined by the World League, where you compete against two online opponents, one each from lower and higher skill levels.

Then there’s the brilliant Friend Challenge, where you can pick a track, set a time, and then invite your Game Center pals to beat it.

Even if that was all DrawRace 2 HD had to offer over the original it would be enough, but the presentational overhaul is phenomenal.

This is easily one of the best-looking games on iOS, with staggering detail on each track and impressively authentic-sounding effects.

The menus – which have a slick, Forza-esque crispness about them - and UI are vastly improved, even down to the way your route is represented on the track.

Thicker, lighter-coloured lines show where you’re braking, before tapering to thin red stripes as you speed down the straights.

Best of all, it refines a near-perfect idea to the point where it’s hard to see how RedLynx could possibly improve upon it. 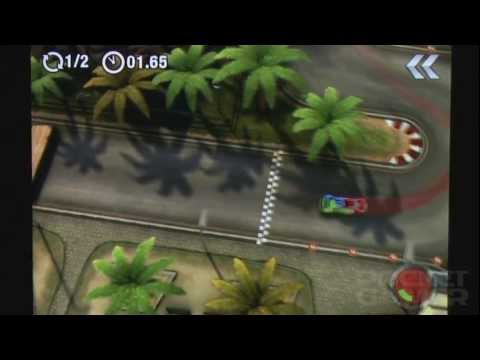 Sleek and immaculately-tuned, this racer offers an unparalleled driving experience on iPad
Next Up :
Hundred Days review - "A success for the management genre"

DrawRace 2, Feed Me Oil, and Harry the Fairy arrive on Google Play

Finger to the pedal: The making of DrawRace 2