On the surface, Double Cross doesn't look like much. It's a cartoon-y platformer with fairly basic graphics and more than a few nods to various other games which influenced it.

Stick with it beyond its opening moments, however, and you'll find a joyous platformer filled with clever ideas, a smart difficulty curve, and some decent storytelling to boot.

It's not the most unique game on the market, and it does suffer from some slightly dull presentation and occasionally unresponsive controls, but overall, it's definitely worth checking out if you need a new platforming game in your life.

Double Cross sees you taking control of Zahra, a brilliant young agent in the RIFT organisation, whose job is to make sure that inter-dimensional travel is strictly regulated between the billions of different Earths that exist.

This all takes place in a traditional 2D-platforming mould, with you running, jumping, and punching anything that gets in your way as you make your way to the end of the level. 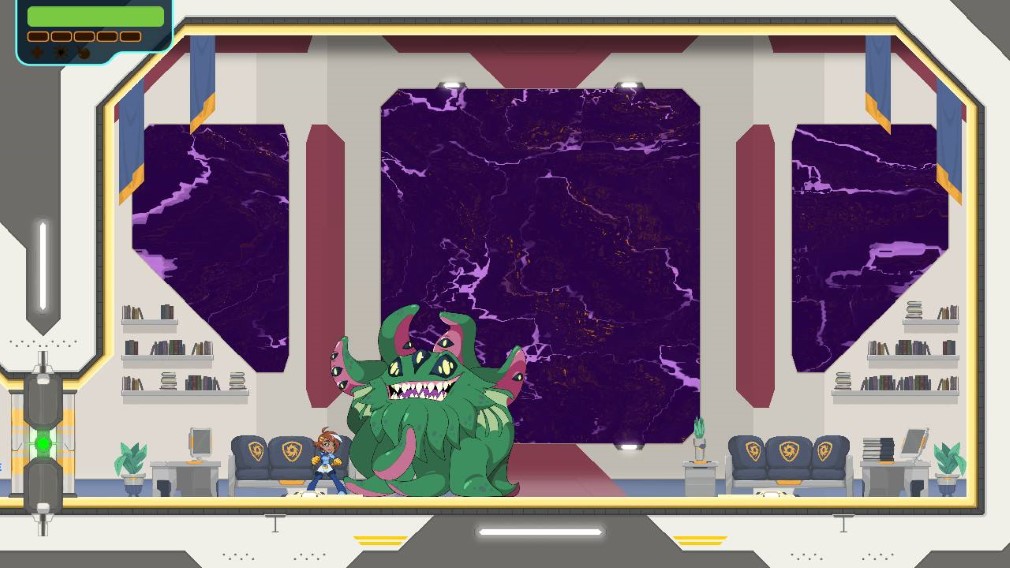 You'll also have to sniff out Upgradium crystals as you go through the levels, either by finding hidden paths or just pulling off impressive platforming moves.

These crystals let you level up and unlock new abilities and moves by expanding your combat repertoire, giving you extra health, improving your energy-collecting abilities, and so on.

All fairly straightforward so far. What sets it apart is the Photon Slinger, a hookshot-esque device which can be fired at certain floating objects in levels, allowing you to propel yourself much further than your standard jump will allow.

It takes a little getting used to as well. Rather than hitting the nearest target, you have to aim your Slinger each time you fire it, giving you better control over which direction it's going to send you.

Time slows down as you aim, so you're given plenty of opportunity to line up the perfect shot, but it can still be a little tricky to get the hang of when you're starting out.

The Slinger can also be used to pick up throwable items in the world and chuck them at enemies, which is handy for taking out aerial opponents or just doing damage to nearby foes.

Double Cross has been cleverly designed around the Photon Slinger, so that each level is filled with opportunities to use it, and when you manage to pull off a string of impressive jumps, you feel like a total badass.

The worlds and levels are also well thought-out in their own ways. Each level has its own twist - sometimes you're playing with movement-altering goo, other times you'll be using balloons to float around - all of which get thrown into the mix when the final level of a world comes around. 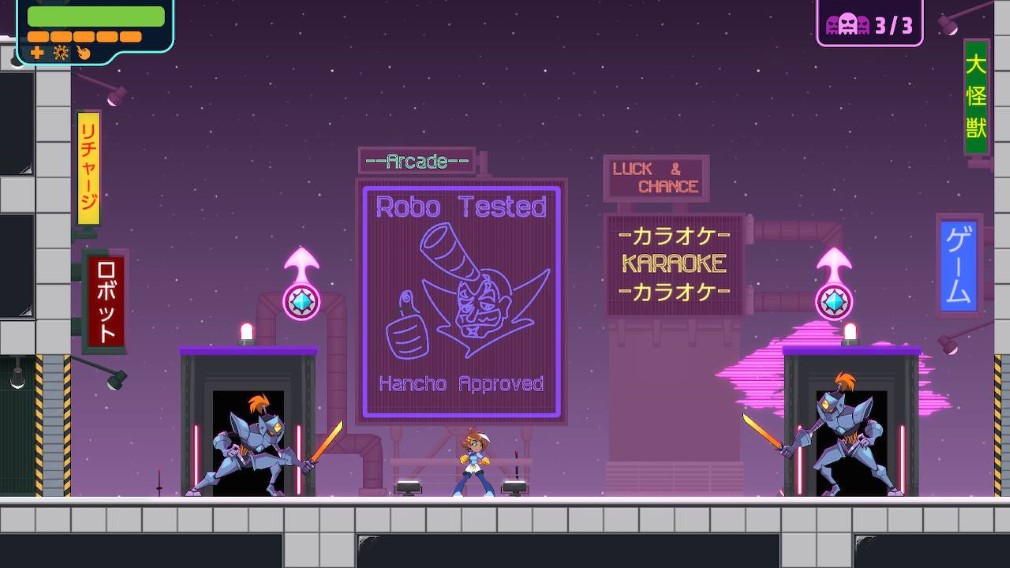 It's a clever, quiet tutorial to each new mechanic, and just when you think you've got the hang of it, another curveball is thrown your way to keep you on your toes. It makes for a very fun, if sometimes frustrating experience.

That said, frustrations do arise in other places. The controls do have a tendency to just ignore your actions - wall-jumping can prove to be a nightmare at times, and when the action gets a little busy on the screen, sometimes your button presses end up doing precisely nothing.

It's also all a bit flat presentation-wise. The cartoon graphics are bright and colourful, but you'll see a lot of repeated elements in each level, and with only a handful of enemy types to fight, you'll grow tired of each combat encounter quite rapidly.

All of the worlds may have a different style, but they all feel a tad lifeless. And while the side stories in the game provide some additional colour, the main narrative is so full of tropes that you'll have guessed the shock ending hours before you reach the conclusion.

But, for once, I'm willing to let a lot of that slide given just how smart the gameplay is. Double Cross knows its strengths and plays into them, offering a fun, challenging platforming experience.

Its presentation is a bit of a let-down, and it needs some technical tweaks to really sing on Switch, but overall, it's worth sticking with the rough parts to get to the real joys of the game.

Double Cross has enough clever ideas and level design to deliver a fun experience, despite some of its nagging problems
Next Up :
Star Discord review - "Needs polish, but it's shaping up to be a true RTS on the go"