Death Coming review - Murder most horrid, or a dark and interesting puzzler?

There's a fine balance between freedom and confusion. Some games give you a world to play with that seems enormous, but is limited enough that you're never going to be wondering what on earth you have to do next.

Others leave you blind and confused, stumbling around not having any fun whatsoever as you try and figure out why you're there, what the buttons do, and whether or not you can just give up and go to the pub.

Death Coming sits somewhere inbetween those two extremes. It's not perfect, but when it gets things right it's a deliciously macabre joy to behold.

The game sees you playing as death's new accomplice. You're tasked with killing and reaping a set number of souls every level. Get enough and you'll move on to the next, your ears ringing with some compliments from the grim reaper.

You bring about the deaths you need by using deathtraps. These are items within the levels that you can poke to activate. A simple example is a bookshelf that, when prodded, will fall on anyone underneath it and crush them to moist goo.

But things get far more interesting and complex than that. Sometimes the machinations involved in getting a kill are beautifully dark. Other times they're a bit too obfuscated, and getting to your goal feels more like trial and error than some Machiavellian master plan. 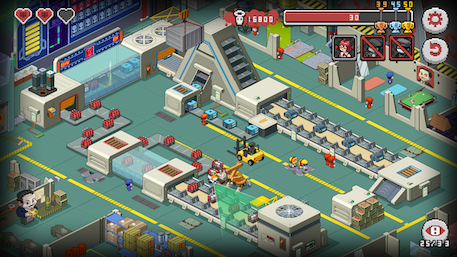 It's not just death who's keeping an eye on you though. As you move through the game, angels will pop up. They're essentially police officers, and if they see you up to no good they'll shut you down sharpish. Get caught three times in a level and you need to start again.

The graphics here are thick and pixely, and you can zoom and pan around to get a better view of the objects you need to brutalise people with.

There's definitely a lot to like in Death Coming. It's a weighty and intelligent game, and the freedom it gives you to puzzle things out on your own offers an authority that other games don't trust you with.

But that breadth is also the game's one drawback. Mess up a few kills here and there and you can find yourself without a clear way to get all the murders you need to move on.

So no, it's not perfect, but a game where you can unplug an electrical cable, then use a giant crossbow to smash a fish tank and electrocute everyone in the ensuing puddle, definitely deserves to be played.

Death Coming review - Murder most horrid, or a dark and interesting puzzler?

It has its moments, and those moments are worth sticking around some of the less interesting parts for
Next Up :
Pawnbarian review - "A minimalist roguelike that's hard to put down'"

Death Coming has just landed on Android so it's time to reap puny, human souls

App Army Assemble: Death Coming - A puzzler worth dying for?

Lend the grim reaper a helping hand in Death Coming, arriving on iOS next week