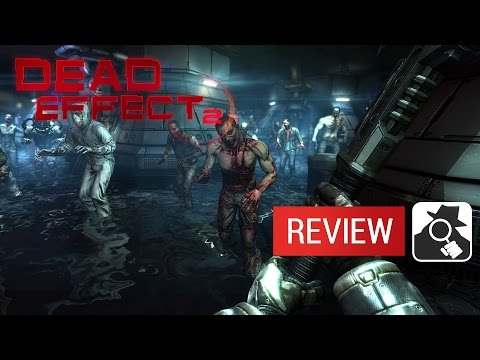 That's because it is. This is Dead Effect 2, the sequel to the Bronze Award-winning space-based zombie killer. It's still set in space, it's still about killing zombies, and it still borrows ideas heavily from the spooky intergalactic canon.

No.. that's... Never mind. The game doesn't really do much different from its predecessor. You're stomping around the fizzing innards of a spaceship that's gone all wrong, shooting abominations with a variety of weapons and special powers.

It is pretty exciting. There's always a horde of shambling undead scientists around the next corner, or some weird skittering monster demon things ready to jump out at you from behind a space tree. Yes, the game has space trees.

Space trees? Wow. What else does it have?

There's a story that follows on from the original. It's all about clones and mad scientists, and some technology that stopped death. You'll shoot zombie robot dogs in the head as well. There's also as least one zombie in it called a Nasty Zombie, which really made me laugh for some reason.

They're not too bad. The default system sees you firing automatically when your reticle rests on something that you're meant to kill. One stick controls your movement, and you swipe on the screen to look around. I've played it with a joypad and, unsurprisingly, it's a much sharper game. But on the touchscreen it's just about adequate.

Just about adequate isn't the most inspiring phrase

No, it's not. But Dead Effect 2 isn't the most inspiring game. In fact in places it's actually pretty offensive. One of the first characters you meet goes by the name Minikin. You thaw him out from cryo sleep, and the process leaves him brain damaged. After that you call him a "retard" several times. As well as bullying him for being overweight.

Yup, and it sours the experience. It's not well written, there are plenty of spelling and grammar errors, and while the graphics are pretty darn impressive, there are some rough edges elsewhere, particularly with fonts and menus, that grate a little.

Hmmmm, I'm not liking the sound of this

Well, it's pretty distasteful, yeah. But the game underneath the gumph is pretty solid. Solid in the same way that a dining chair is solid. You might sit on it a while and enjoy it, but after a few hours you'll probably want to go and sit on the sofa.

That was a really strained analogy

Hey, I'm busy and my head hurts. In all seriousness though, Dead Effect 2 isn't a bad game. It has some bad aspects, but the core loop of shooting zombies in the face is as much fun as it ever was. The shift to free to play hasn't damaged it too much, although there's a decent chunk of grind if you don't want to pay.

I'd say give it a go. Its more unpleasant aspects are pretty unpleasant, and if they're going to upset you then you should avoid it. But it looks pretty good, and if you haven't shot enough zombies to last you a lifetime yet, there's plenty here to fill full of space bullets.

Dead Effect 2 is more of the same, but if that's what you're after, and you can look past its ickier traits, you'll enjoy it
Next Up :
Hero Emblems II review - "Lovely visuals and music, but match-3 combat lacks strategic depth"

#PGCHelsinki: Dead Effect 2 is the runner-up at the Very Big Indie Pitch

Dead Effect 2 is gory, violent, and set in a future where space cannibals exist