Invaders have been entering our airspace since games began, messing around with our things, shooting up our colonists, and generally making a nuisance of themselves.

There are many stories about the relationship between humans and extra-terrestrials, but the moral tying them all together is this: if you ever meet an alien, he will shoot you.

Darkside launches us into another intergalactic conflict, this time against an evil empire that's trying to steal the minerals from our asteroid belt. The bounders.

The gravitational force is strong

The game plays like a gravitationally infused Asteroids. Each level is locked into the space-time distortion of a large rock, around which fly several smaller rocks and some dastardly aliens with lasers.

It's your job to destroy these various satellites, piloting your fighter with a floating stick on the left of the screen and unleashing a hail of laser fire with one on the right.

In Arcade mode, you need to survive for as long as possible with just three lives. Mission mode is all about completing objectives, which range from staying alive for a set amount of time to protecting mining crates and power stations from being destroyed by the enemy.

Survival mode, as the name suggests, is all about survival. This time, the odds are stacked against you, with just a single life and the difficulty ramped up to insane.

It doesn't take long for the rock you're flying around to become littered with power-ups and score boosts. The weapons you can pick up range from beams of blue energy to multiple rockets, all of which deal extra damage.

You've also got a neutron bomb, which destroys most of the things on the screen in a blinding flash.

Darkside is a great-looking game, and it's backed up by some pretty entertaining space based violence. The way you chip apart the asteroids, smashing them into smaller rocks, will be familiar to gamers of a certain age, and the glittering light show of explosions and weapons fire is a sight to behold.

The only problem is that it sometimes feels a little too confined, its mission parameters a little too narrow. But, in short bursts, destroying another alien race - and some big rocks to boot - is a lot of fun. 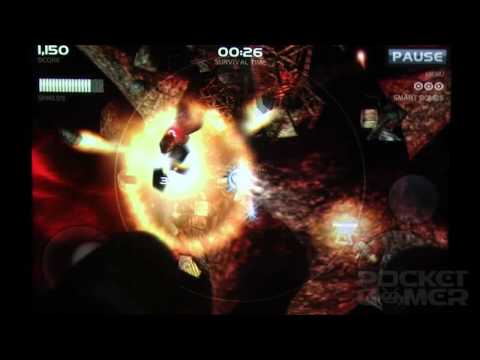 While it isn't the most innovative of shooters, Darkside is enough fun that you can look past its faults
Next Up :
Valiant Hearts: Coming Home Netflix review: "A touching war story from various angles"

Blast your way around massive alien-packed 3D asteroids in Darkside