CSR the 'biggest car manufacturer in the world'

"I've got a bit of a cold at the moment," said Boss Alien's Jason Avent half way through his CSR Racing talk to a healthy crowd at GDC 2013 in San Francisco.

"I apologise - it's making my voice deeper than usual. I actually feel quite manly."

It's fair to say the vast majority of those sitting in the glow of the conference room's huge screens as Avent cycled through his presentation weren't bothered by his new found earthy tones.

With CSR Racing having hit 50 million downloads – topping app store charts in 170 regions in the process – any nuggets of wisdom Avent could deliver, gruff voice or not, were going to be lapped up.

And he didn't skimp on that score.

"I started Boss Alien with a group of my friends, and even though the team all came from a console background, we were open to freemium a lot more than other studios," Avent said.

"We believed mobile was the next big platform. But we were the new kids on the block and we had a lot to learn, so it was important not to be arrogant and think we knew everything."

Avent said the debate of whether freemium could work or not was null and void. A successful model "had already been established" on social platforms like Facebook. What Boss Alien needed to do was shift it so that it fit in with CSR Racing's look and feel. 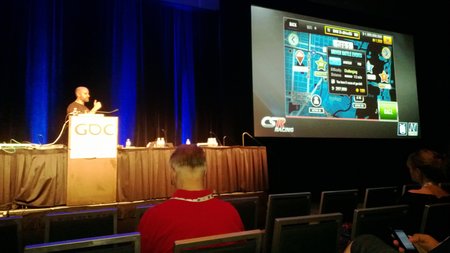 "We would have been mad to ignore the model that had already been established," continued Avent.

"We took these established traits and dressed them up differently to fit within our game. The delivery time for cars, for instance, is the same mechanic you see in lots of city builders and so forth, but just delivered in a different way."

Avent said that CSR Racing was developed at a time when high end games all went the premium route – games with high attention to detail or the "console rigour" Boss Alien had on board from day one very rarely tended to be free to play.

"Iteration on the race results screen took months and months of effort, for instance, but people see it every 30 seconds, so it was important to make sure it looks as good as it could," said Avent, noting that analytics and psychology have a part to play.

"This is where you spend your money, but you've got to allow for iteration. If you do things again, they'll end up better.

Iteration is "essential" if you want to deliver quality products, but it's both difficult to schedule for, and also hard to take your personal opinions out of the equation.

"It's sometimes difficult to drop things and do them again when you've invested in them," said Avent of CSR's UI.

"You've got to be brave – you've got throw away designs you've fallen in love with. It's important that changes you make – such as to Start buttons – are based on research and experience rather than personal choice."

Indeed, Avent cycled through a series of changes to various buttons and UI implements deployed within the game – from the actual gameplay screens to the race maps.

"Changes that seem quite subtle on the outside, we actually spent 60-70 percent of our budget," added Avent. "But you've got to know when to stop – very easy just to iterate for the sake of it, for personal choice."

The other major element Boss Alien had to focus on was the game's chosen format. Mobile games, Avent said, rarely garner a player's full attention, and this fundamentally changes the design of successful games.

"Our audience may be drunk, or watching the TV, so you need to make the game easy to use, no snags and no unintended friction," he continued.

"Simplicity is a necessity. For instance, the game's core – from racing to winning – takes about 30 seconds, and winning gives you a good feeling, which then brings players back. You win a race, you get money, you buy upgrades, you get to the next boss, you get the next car and get to the next tier – it makes it seem worth playing and repeating, because you get rewarded."

Of course, Boss Alien hasn't been alone during its CSR journey. Publisher NaturalMotion has also been there along the way, and according to CEO Torsten Reil, the game's success is helping to evolve the company as a whole.

"Matchbox sells 50 million cars a year, which I think is pretty amazing," opened Reil in his follow up talk.

"Global car production is predicted to hit 60 million in 2013. For CSR Racing, however, we're selling 120 million cars a year, which we think means we're actually the biggest car manufacturer in the world," he added, to a flurry of laughs.

"Admittedly they're virual cars, but still."

Indeed, such was CSR Racing's early success – generating revenue rates Reil said the company previously didn't think we possible on mobile – that the NaturalMotion team spent the game's first week eating a lot of cake and drinking a lot of champagne.

The success, however, had been well earned.

"With CSR, we started by looking at genres we thought we could disrupt and bring something new to," said Reil.

"We loved Real Racing 2, for instance, but it didn't actually pass our Starbucks line test." The Starbucks line text, Reil explained, is the ability to have a meaningful experience in play while waiting in the line at Starbucks.

One game that managed that, Reil suggested, was Creative Mobile's Drag Racing. But NaturalMotion and Boss Alien wanted to go further.

"The emotional attachment that people have to CSR's cars is incredibly important, so it was crucial that licensed cars from the big companies," he said.

"It allowed us to create games with a visual fidelity – we could go into real detail across all our cars. Also, most of the mass market are rubbish at games – that's something we learned with Backbreaker. You need to make the player feel good about the experience from the start, so that's what we took across with CSR Racing."

The more rewarded a player feels, the more likely they are to invest in the experience. Reil revealed that players parting with cash for nitros ahead of final boss battles in CSR Racing has generated $2.5 million in one month alone in the past.

As a result, NaturalMotion and Boss Alien continued to invest heavily in the game – CSR now boasts a large live team than the original development team that worked on the game.

"If you want the game to last, you need to deliver a fresh experience every month," he concluded.

"We're not playing the user acquisition game. Success is all about building big experiences."