We can at least agree on this: Crow is an absolutely gorgeous beast. It might be harder to reach a consensus on the actual game beneath all that gloss.

Sift through the game's wilfully oblique exposition and you'll find the tale of you - the Crow - and your quest to do something-or-other at the behest of some mysterious who-knows-what.

It's all told through abstract cinematics and ponderous narration - neither offering much in the way of context. It's a game that strives to be enigmatic but whose vagaries are more often than not annoying.

As the crow flies

Still, with a little persistence you can start to make sense of Crow's disparate elements. Each stage features a free-roaming over world where you're free to flap around, take in the scenery, gather some skill-upgrading trinkets, and seek out a handful of combat-focused sub-missions.

It's pretty pedestrian stuff - and the game's ill-conceived control setup means your hands will spend most of their time obscuring those beautiful visuals.

Thankfully, combat missions fare better, offering a combination of side-quests and boss battles. These consist of third-person on-rails segments that see you gathering gems to fill your magic gauge then using gesture-based commands to unleash attacks when you're close enough to your target.

There's a small strategic element as you hunt out enemy weak spots - but, again, it's all rather abstract. And the endlessly looping on-rails setup means that it's back to the start for another uneventful circuit if you fluff up your attack plan - reach the game's poorly-balanced later levels and Crow becomes a patience-shredding circus of pain.

But for all its frankly rubbish malarkey there's something about Crow that's hard to resist. There's a definite magic to its artful pretensions and brooding ambience - even the simple act of gliding over those fantastical landscapes has its own unique appeal.

'Unique' is a word that serves Crow well - it's a delightfully single-minded experience that works its little socks off to create intrigue with narrative tricks and dazzle with graphical ones.

It's just a shame that the end result of this obvious effort isn't more successful. 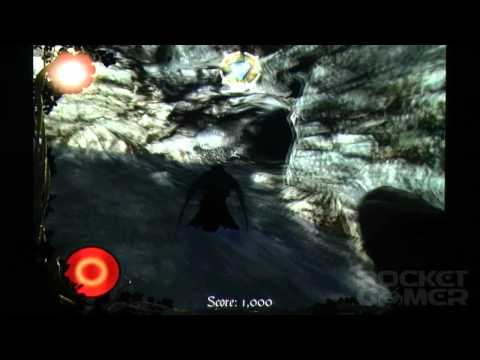 A strangely lovable if utterly shambolic mix of gorgeous visuals and tedious game mechanics
Next Up :
Honor 50 review - "Great for social media fans, and a strong show from Honor"