Cosmic Express is a beautifully presented puzzle game that sees you planning out small scale railways in space. As you do.

It's the sort of game that gives you time to ponder your every move, and you're going to need it. Because while things start out simple, soon you're in a whole world of confusing track-laying conundrums.

This is a puzzler with a heart and a style all of its own, and while it does offer a stuff challenge, it's the sort of challenge you're going to want to overcome.

The game is all about getting cute little aliens from A to B. Your only job is to lay down the track that's going to pick them up and deposit them at their spaceships.

To begin with that's pretty easy. You drag the track across the gridded levels, then when you've sorted out all of your passengers you lead your train to the exit. 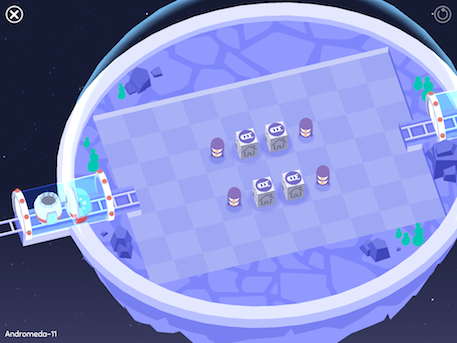 But things get pretty complex pretty quickly. Because of the finite amount of space on each level, and the fact you can't cross over already laid track, you need to start thinking outside the box.

The shortest path is rarely the way forward, and soon you'll be drawing out twisting paths that weave through the levels just to make sure everyone gets to where they want to go.

And it's not just the positioning of the aliens that makes things difficult. You'll also need to deal with critters that pollute your train and mean other potential fares won't get in.

There are different coloured aliens too, and you need to make sure you're taking the right hued space monster to the correct ship, otherwise you're never going to get things finished. 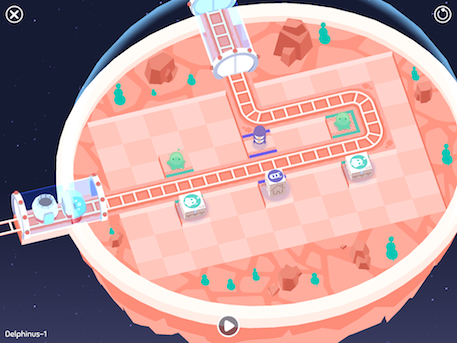 It might sound like a lot to take in, but the game eases you into its ideas gradually. And once it gets its claws in to you, it's going to be difficult to shake it off.

And while there are some difficulty spikes, there's always more than one level open at once, so you can try a different chalenge rather than smashing your head against a space-train brick wall.

Cosmic Express does exactly what it sets out to do. It creates a charming, at times infuriating, but always fair puzzle game that fits wonderfully onto mobile.

If you've ever wondered what it'd be like running a train line in space, well wonder no more. And if you're not weird and have never wondered that, then this is a great game that you should definitely check out all the same.

A rich and varied puzzler that drives off in interesting directions. Or it does if you get the track right
Next Up :
Xiaomi 11T Pro review - "Pro in name, pro in nature"

[Update] The galactic puzzler Cosmic Express hits out on iOS, Android, and Steam on March 16th

Keep the space colony trains running in Cosmic Express, the next game from A Good Snowman Is Hard To Build developers