Cordy wasn't particularly innovative, but it set the bar for entertaining but affably generic touchscreen platformers, with its electronic vistas painted in gorgeous LittleBigPlanet-esque hues.

Cordy 2 fits comfortably into the same little niche. Don't get me wrong - this a hugely entertaining, brilliantly constructed platforming experience with a layer of triple-A polish that most of its App Store and Google Play competitors simply can't muster. But it plays like a compilation of platforming's greatest hits.

There's nothing wrong with that, and you're likely to have a misty-eyed look on your face as you leap and bounce your way through Cordy 2's lovingly crafted levels. But if you were hoping this would be the instalment that really kicked the series up a notch, you're in for a reasonably pleasant disappointment.

Once again, you're playing as the constantly chipper titular robot - a little chap who likes nothing more than helping out when he finds strangers in need. After a crash landing and a few nuggets of exposition, you're thrown into the first level.

Directional arrows on the left of the screen control your movement, while a 'jump' button on the right lets you spring into the air. Next to that sits a context-sensitive 'action' button. This lets you grapple onto nearby hooks and transporters with your cord, or use the special move of your equipped pod.

You pick these pods up as the levels dictate, and each has its own unique power. One lets you stick to walls and get a speed boost, another lets you smash through certain pieces of scenery, and a third allows you to blast into the air.

It's these different abilities that set the tone for Cordy 2's levels, and give the designers the freest reign to experiment. One level, where you grab a helicopter pod, plays like a simplified version of Tiny Wings, for example.

Too often though these flirtations with different styles can lead to frustration. The jet pack in particular is guilty of bringing with it some severe difficulty spikes that spoil the rhythm of an otherwise free-flowing game.

There are exceptions, of course, and using your special smashing power to carve out a path through breakable rocks stands out as a prime testament to the talent behind these games. It's just a shame that it's never quite given the room to shine.

Bad guys all have obvious weak spots, usually glowing, and boss battles are all about pattern-recognition and hitting the big bad where it hurts when the time is right.

There are spinning sparkly things to collect, albeit cogs rather than rings, and plenty of sections that feel like they're lifted from a history book about the best platformers of the '90s.

The only major dent in Cordy 2's armour is an odd progression system that demands you've collected enough stars to unlock certain levels. You can easily finish a level without collecting any of the three celestial bodies on offer, so it can condemn you to replaying chunks you've already completed, once again breaking the flow of the game.

Cordy 2 might rest on its laurels, but it's still an engaging, charming platformer that pulls you into its world and refuses to let you go. There are flashes of originality and genius, but more often than not its happy to entertain rather than innovate.

And, in the end, that's fine. It would be nice to see the obviously talented SilverTree Media team take a risk somewhere down the line, but until then its knack for getting the most out of the fundamentals of the platform genre will have to suffice. 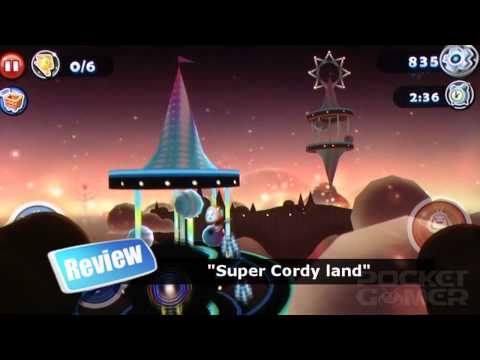 An entertaining platformer with a decent chunk of content, Cordy 2 will keep you playing for a good while, but it doesn't bring anything new to the platform genre
Next Up :
Jade Order review - "An puzzling path of the warrior"

Cute Sonic-style platformer Cordy gets a surprise sequel on iOS