It's somewhat ironic that in this era of high-definition gaming, old skool pixel-art games are enjoying a considerable resurgence.

The iPhone has played host to floods of blocky 2D games that take inspiration from the days when the ZX Spectrum and Commodore 64 ruled the roost.

Vintage aesthetics aren't the only thing these games borrow from the past – they're also as hard as nails. Commander Pixman is the latest to roll off the production line, and like its peers it will test your skill as a gamer.

The objective is simple: you have to guide the titular hero from one end of the level to the other. Completing the stage requires you to negotiate platforms, avoid obstacles, and blast enemies.

Controls are also kept simple. You have 'left' and 'right' buttons, as well as 'shoot' and 'jump' commands. These virtual controls are overlaid on the screen without obscuring the action, yet they're mercifully large enough to ensure you don't miss them during tense moments – of which there are many.

Although it starts off at a relatively sedate pace, Commander Pixman quickly ramps up the difficulty by placing punishing demands on you.

Not only do you have to deal with advancing monsters, floating Space Invader-style aliens, and automatic gun turrets, but you'll also need to be quick-footed to avoid the blast from proximity mines - which detonate a few seconds after you step on them – and deadly spikes, which spell instant death.

Because Commander Pixman is a hardened space solider, he comes equipped with a rocket pack that grants him unique jumping abilities. A quick stab of the 'jump' button will result in a small leap, which is ideal for traversing tiny gaps.

However, holding down your finger on the 'jump' command for a little longer triggers the rocket pack, which bestows our hero with the power to float ever so slightly before plummeting downwards. It's a unique control setup and one that takes a while to become accustomed to.

Invariably, you'll need to tackle each level several times before you find the perfect route. Rather than keep a score based on your destructive capabilities, Commander Pixman focuses on speed-run challenges. Your rating on each level is essentially how quickly you can beat it.

When you eventually complete a stage, you're shown a composite replay of every attempt you've made, and it's quite entertaining to see several Pixmen leaping over the level simultaneously.

If you're looking for a tough platform adventure with old skool sensibilities then it's hard to go wrong with Commander Pixman. Aside from its occasionally sadistic difficulty, there's little to fault. The controls are tight, the presentation impeccable, and the challenge is considerable – possibly a little too much so for most gamers. 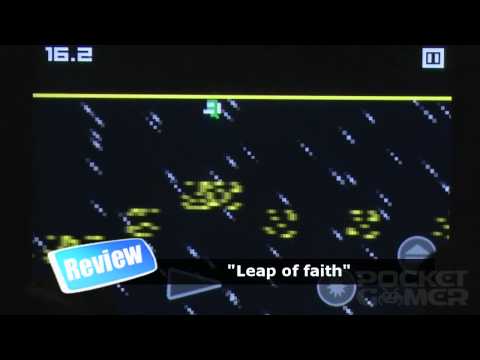 Commander Pixman takes good old-fashioned gameplay and wraps it up in an appealing retro package which will keep adrenaline junkies sated for quite some time. The steep challenge may be a little too much for some players, however
Next Up :
Jade Order review - "An puzzling path of the warrior"