There are some who believe that our first contact with extraterrestrials will be swiftly followed by an alien civilization plundering our planet of its natural resources and enslaving our population in a form of galactic colonialism.

The evil steampunk antagonist of Color Bandits, however, has more abstract ambitions, electing to steal something altogether different from your home world: colour.

Your challenge, therefore, in this aesthetically pleasing side-scrolling twin-stick shooter is to restore red, blue, yellow, and every shade in between to the world.

You control the hero aiming to end this monochrome purgatory in a quest that spans six differently themed worlds, each of which features several levels and a boss fight.

Among the half-dozen worlds - set against a forest or wasteland backdrop, for example - you attempt to collect three stars, commensurate to the points earned from vanquishing the various enemy units and missiles.

While the game screen is constantly shifting, you move from left to right using a slider at the bottom left of the screen, with shots aimed and fired from a joystick on the opposite side.

In Color Bandits, you are issued with a standard gun to use, though periodically a random, more powerful weapon will appear in the sky. These firearms can cause some serious damage, but have very limited ammo - so you need to make the most of them.

After gliding through the first world and acquainting yourself with the basic mechanics of the game, the potency and number of enemies quickly increase, along with the volume of projectiles locked onto your bonce. Bosses inevitably prove challenging, with each one having different characteristics and movement patterns, making each battle a unique proposition.

The inclusion of checkpoints at the end of each level means that completing each world isn’t too difficult, but given that dying results in your forfeiting all your points, acquiring all three stars is far trickier.

Blasting the steampunk boss’s robotic enemies into oblivion is satisfying and the arsenal of exotic weaponry is both fun and easy to use. The most striking aspect of Color Bandits, though, is its art style.

Initially, the levels are painted in monochrome, with the colour gradually restored as you progress. This effect not only looks pretty, but also offers a visual reward for your achievements.

The soundtrack may not be engaging enough to convert those who normally play on mute, yet the retro-influenced music reinforces the old skool appeal of the game.

Color Bandits manages to be both engaging and accessible, even if it can feel repetitive and the Adventure mode isn’t the longest.

The relatively short lifespan of the Adventure mode is offset to some extent by the inclusion of a Survival mode, which is unlocked during play. The boss fights, however, contain most of the original or novel elements, yet they are in preciously short supply.

It’s not a complete reimagining of a familiar genre, but trigger-happy high score junkies will find much to like in Color Bandits. Fans of retro side-scrolling shooters wanting a new fix on iPhone could do far worse. 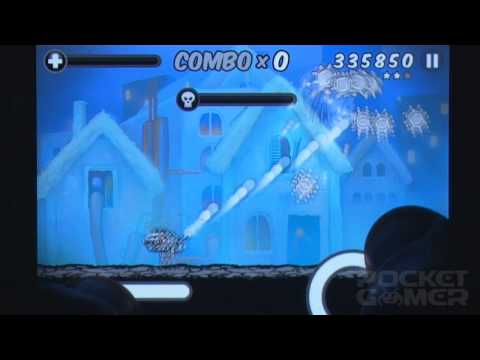 An impressive side-scrolling shooter whose intuitive touch screen controls and unique art style compensate for a lack of variation and longevity
Next Up :
Sumire review - "Why do some days stay in our thoughts forever?"