Making a mess is a lot of fun. That's something that video games have known since the year dot. While construction is nice, and putting things in the right order makes you feel like a normal well-adjusted person, nothing can top the cathartic thrill of a well-modelled collapse.

Angry Birds traded magnificently on humanity's urge to destroy, but there was always something missing. Watching a structure collapse after a well-placed shot is great, but Rovio's world conqueror just doesn't go far enough.

Drawing heavily on the avian-flinging template, the game sees you on a quest to free your marshmallow chums. They've been taken hostage in the land of chocolate, and forced to wear unflattering celebrity costumes.

Instead of a catapult, you have a baseball bat-wielding super-mallow at your disposal. You drag your finger back from him to control the power of your shot, and slide it up and down to find the correct angle.

Each level is a puzzling construction of blocks and obstacles, and you're given a set number of different sweet treats with which to destroy these prisons and free your stricken comrades.

These desserts have their own special powers, from expanding jellies to belly-flopping sumo-marshies and sneaky ninjas who lash out with their swords.

Into this familiar mix, Coco Loco throws in its trump card. Vats of swirling cocoa litter the levels. Pipes spew it out, it pools and gurgles, wobbling gently, ready to be unleashed in a glorious, delicious tidal wave.

You'll be plugging up holes with your jellies to back up flows, using physics to propel oceans of chocolate in the general direction of your trapped kin, and blowing up huge gelatinous structures, liquidising them in the process.

The way the fluids flob and bubble is a joy to behold, and the first time you flip over a container and watch its contents coat the level you'd be forgiven for letting out a squeal of delight. When Coco Loco gets mess right, it's something to savour.

The problem is, too often the game falls back on tried and tested formulas, rather than pushing forward with its own. There are moments of inspired level design, but they're followed by creations that pay too much deference to their predecessors, and abandon originality in favour of retreading old ground.

While Coco Loco tries to wriggle out from the shadow of its major inspiration, it lacks the confidence to take that last big step. What you're left with is a decent enough game, but one haunted by glimpses at what could have been.

At its best, Coco Loco is easily as good as Angry Birds. At its worst, it's just another in a long line of coat-tail pullers. Its sloppy take on destruction is worth the asking price, but get ready for some mild disappointments along the way. 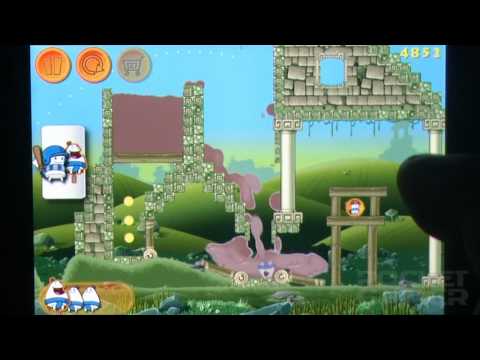 When it excels, Coco Loco is a showcase for its developer, but it slips back too quickly into comfortable routines and safe choices
Next Up :
Dr. Chatelet: Faith review - "A surefire way to make you appreciate modern medicine"