Circa Infinity - I'd happily get stuck here forever 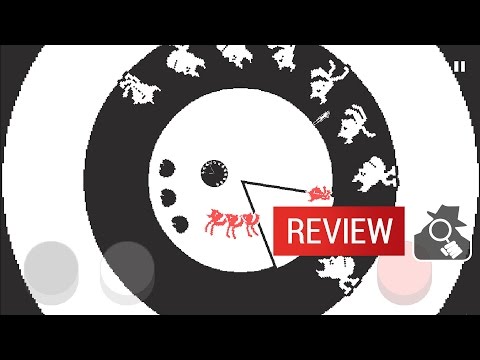 Subscribe to Pocket Gamer on
Sometimes retro platformers can feel a little samey. It's partly because they're often based on a narrow strata of leaping games that came out in the dim and distant past.

Circa Infinity doesn't have that problem, mainly because it's a bonkers smashing together of a platformer, Super Hexagon, and a Dante Alighieri fever dream.

It's brash, chaotic, and unlike anything else on the App Store. It's tough but generous, it looks amazing, and it plays wonderfully. Quite frankly, what's not to like?

What's so special about it?

Well, rather than just leaping around platforms, here you're leaping into concentric circles. These are patrolled by red monsters, who you need to avoid.

Each circle has another much smaller circle swirling around in it. That's your goal. But often you need to find the right time and place to jump into it, otherwise you'll just flob about in the air and miss it altogether.

The controls are, as you might expect, simple. Virtual buttons let you move left and right around the circle. Another button lets you jump or, if you're stood in the right place, suck yourself into the interior of the next level.

New beasties are added with each new section of circles. Some of them swap between the inside and the outside of the rim, others fly around the centre. Getting past them is all about timing and figuring out where you need to stand.

And it makes for a wonderfully compelling experience. If you get hit you bounce back to the last circle you completed. It feels fair, and it means you're never too far away from where you died.

Okay, this does all sound pretty special

It is. I spent hours bashing through it last night, and I enjoyed each frenzied jump. There's a vague puzzling element to working out when you need to enter the circles, and when you pass a particularly tricky one it feels amazing.

And there's a lot to do here as well. Trying to complete all the levels without dying is particularly challenging. But you never feel overwhelmed, and the skills you learn in the earlier levels are still applicable deeper into the game.

Circa Infinity is a real breath of fresh air. It's bold and brash in all the right ways, but eminently playable as well. Just go and get it. You won't be disappointed.

Circa Infinity - I'd happily get stuck here forever

A perfectly balanced mix of chaos and enjoyment, Circa Infinity is a must buy
Next Up :
UFO99 review - "A fun little arcade game on the go"

Must buy circular platformer Circa Infinity spins onto Android

Circa Infinity is a stylish precision platformer through a circular hell