Have you ever felt like you're the only person in the room who doesn't get a joke? Everyone else is bursting at the seams with laughter, but you just fail to see the funny side.

That's how I feel about Jeff Minter's Caverns of Minos, a wacky and whimsical send-up of Atari 2600 shooters. There's obviously supposed to be something gut-wrenchingly funny about pants and sheep and cheese and My Little Pony, but I just can't see it.

We all know Minter's a bit of a character. His strange fondness for ruminants comes through in his psychedelic games (his recent iOS portfolio has got more goats than a petting zoo), his nickname Yak, and his alleged instances of bleating at people.

And there's nothing wrong with a little goat-flavoured eccentricity, but in this case it just feels like the stupid noises, lawless mish-mash of graphical styles, and unhelpful humour detracts from the package rather than improving it.

Goat to give it up

Whatever the case - humour's a subjective thing, after all - beneath the grunts and sheep hides a smart shooter that's unashamedly retro.

At its heart, Minos represents a golden era of gaming, and it's an obvious play on one specific cartridge: Caverns of Mars, a wildly popular Atari 2600 game from the early '80s.

In Caverns of both Minos and Mars, a spaceship slowly descends into a rocky cave, avoiding obstacles and fending off enemies. At the very bottom of the pit you'll find an object - a big ticking bomb in the case of Mars, or a photograph of a biscuit in Minter's deranged port.

You then have to take the object back to the top. Because you're now kicking on the spaceship's fuel-hungry thrusters your craft drains out petrol like a sponge. There are also more enemies on the way back up who want to stop you from escaping with the biscuit. Or some pants. Or a musk ox.

So you need to plan your descent more carefully. Don't nab all the fuel tanks on the way down, and avoid picking up some of the minotaurs on the first trip - these guys replenish your shield and fuel supply when collected. That way you can resupply on the tougher return journey.

It's a clever enough system and forces you to balance out risk and reward - should you rescue that tricky group of minotaurs on the easy trip down, or save them for the hellish trek back up? It's not exactly rocket science, but it encourages a little more thought than the average alien blaster.

So far, so Caverns of Mars. But developer Llamasoft welds and bolts some other iconic shooters on, too. The ship has been retrofitted with thrusters borrowed from Lunar Lander. This gives you abstracted but accurate control over your ship, and a feathery touchdown when you land next to minotaurs.

The controls, in general, work well. The patch of screen you thumb to steer feels too restrictive and finicky at first, but as the game gets harder - all zapping force-fields and showers of pink bullets - you'll appreciate the precision. Tilting to shoot in different directions adds a level of physicality.

Elsewhere, other shooters are represented as enemies. Some nasties march in sideways to the bleeps and bloops of Space Invaders, while other insectoid enemies snake down the screen like the baddies of Galaga. Another iconic shooter is hidden in the difficulty setting - the hardest mode makes you wrestle with the infamous white polygon of Asteroids.

The presentation mostly captures the nostalgic thrill of these antique games. The backdrops are pitch-black star-fields, the text is in a blocky hard-edged alphabet, and the props are all pixels.

But every now and again something belies the retro feel. The explosions are new and disgustingly high-resolution. The treasures at the bottom of the cave are from clip-art collections and royalty-free photo sites.

The 16-bit heart icon from your level counter is totally not contemporaneous with the 8-bit gameplay, like putting a baseball cap on Michelangelo's David.

Deer me, these puns are atrocious and I should be ashamed

The sound effects are even worse. The incessant bloop of your ship's guns and the odd Space Invaders leitmotif is interrupted by a deranged soundtrack of sampled bleats, grunts, burps, squeaky hand farts, and a chime that sounds like it comes from The Legend of Zelda: Ocarina of Time. There's no music to cover the ugly cacophony, either.

Caverns of Minos is a game of two halves. There are the underlying mechanics: a clever and rewarding collage of famous Atari shooters.

They don't quite have the entrancing addiction of a Jetpack Joyride - maybe that's due to the constantly scuppered pace of stopping to pick up minotaurs, or maybe it's just not as much fun - but it's an accomplished shooter fit for '80s nostalgics.

But then there are the trappings. Everything remotely good about Minos is hidden beneath a ridiculous mish-mash of eras, styles, pixels, and farts. I appreciate creativity and reward imagination, but Minos is just plain weird and some won't be able to look past the madness. 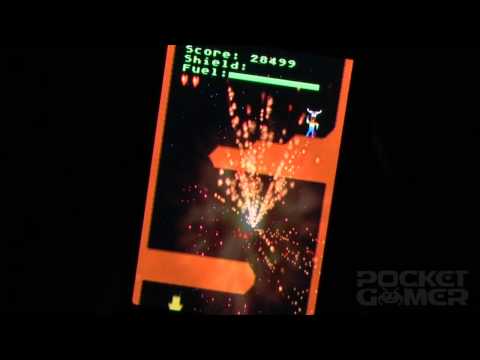 The eccentric Jeff Minter presents a clever retro shooter than blends together the best elements of various Atari classics. But his eccentricity can prove too much, often droning out the best bits with his baaaarmy sense of humour
Next Up :
Warhammer 40,000: Tacticus review - "An approachable strategy to a grimdark future"