The idea of flinging heavy objects at wobbly structures is as synonymous with iPhones as bad battery life, but rarely has it looked as impressive as it does in Wicked Witch's new rock-chucker Catapult King.

Instead of hurling irate birds or disgruntled space cows, you're using a traditional trebuchet to propel large stones at irksome knights. Who, of course, are standing atop ludicrously precarious wooden structures, begging to be murdered.

Where things differ dramatically from Angry Birds and its ilk, though, is in the perspective.

Catapult King is a fully modelled 3D effort, with pin-sharp visuals, lovely blue skies, and plenty of charm and character. Unfortunately, this is also where the game really suffers.

Working out the trajectory and power you'll need to use on your catapult (which uses the familiar drag-and-release control scheme) is incredibly difficult in 3D, and without an aiming guide or any way of altering your projectile post-launch, it's often a case of trial and error - even more so than its 2D brethren.

To combat this, Wicked Witch lets you trade in magic (earned by taking out the mischievous knights with your rocks) for highly powered ammo, and a sparkly blue guide arrow.

Even then, it's still extraordinarily difficult to work out where your missile is going to land. Many of the power-ups require a second jab of the screen to activate, be they a meteor shower or an earth-quaking shockwave, but all too often you’ll unleash their powers too early or too late. And that crucial magic runs out very quickly, leaving you to either fork out real money through IAPs or revisit earlier levels repeatedly.

It's a shame, too, because when Catapult King works (particularly in the earlier, less demanding stages) it still captures the familiar sense of satisfaction that comes from toppling a huge wooden tower and watching cartoon enemies perish.

With extended play, you can start to learn the intricacies of the trebuchet and get your head around the power and angles required for great shots, but this sort of learning curve is antithetical to a genre that's built around accessibility.

Catapult King is a good-looking chucker, then, but not one that's going to rock your world. 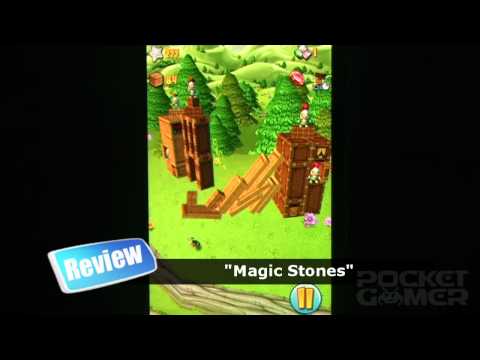 It certainly looks the part, but Catapult King's use of 3D makes it all too difficult to enjoy. Stick with those Angry Birds for your castle-toppling needs
Next Up :
Hindsight review - "Deeply emotional but a tad repetitive"