How to floop the pig: Card Wars - Adventure Time tips, tricks, and advice

Helping you keep your Cool, Guy

So, your Adventure Time addiction has got the better of you, and in-app purchases from the new Card Wars game are sucking you drier than Marceline's dad?

Fear not: we're here to help.

Not by talking you out of it, mind. But by ensuring you spend as little as possible and spend it on all the right things. We're calling it our 'handy Card Wars - Adventure Time guide'.

You start out playing as Jake, with a deck tuned to three corn lands and one useless swamp. Most of your cards are tied to one or the other. And you'll quickly discover that the "rainbow" creatures that you can summon onto any land are comparatively rubbish.

Children of the corn

This should tell you two things:

Firstly, that you don't want rainbow creatures. You also don't want to be stuck with useless cards in your hand, tied to a land type you can't use, so you'll need to refine your deck to a single land type as fast as possible.

Secondly, that most of your starting creatures are corn and Jake has a corn-based power; that single land type should, therefore, be corn; and you should level-up Jake as much as possible.

After a few hands in which empty lanes on your side of the board have led to your rapid demotion to "Dweeb" while your enemy exults in being the "Cool Guy", the importance of creatures becomes apparent.

This can't be overstated: the entire goal of this game is to keep all your lanes occupied while ensuring as many enemy lanes as possible are vacant. Since creatures occupy lanes, do damage, and have useful "floop" powers, they're the cornerstones of your deck. 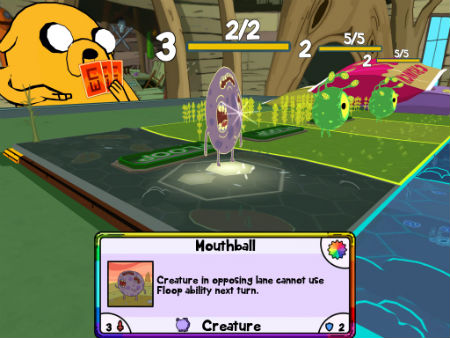 Everything in your deck has to be geared towards keeping your lanes full and emptying the enemy ones. Most of the cards should be creatures.

That's because there's nothing as frustrating as having an empty lane on your side of the board and nothing to summon into it. And there's really no good reason why those creatures shouldn't be the most kick-ass at your disposal.

To get those beefy beasts, you'll need to use card crafting. Don't be shy of burning lesser cards and gold for this purpose, because there's rarely a good reason to hold on to a weaker creature when you could be fielding a stronger one.

Most cost a flat 1 point to summon, after all. Whenever you unlock a new card recipe that looks useful, check to see if you can craft it. If so, build as many as you can and shove them in your deck.

Unless you're lucky enough to get brilliant card drops or rich enough to open a lot of chests, you're going to have to include some spells or buildings to fill out your deck.

That's okay. Heck, that's good even. Well, as long as you can manage 90 percent creatures. The spells you want are those that clear enemy lanes fast. Volcano is great for this. Cerebral Bloodstorm isn't bad, either.

Failing that, buildings like the Comfy Cave are great for giving your own summons additional staying power. 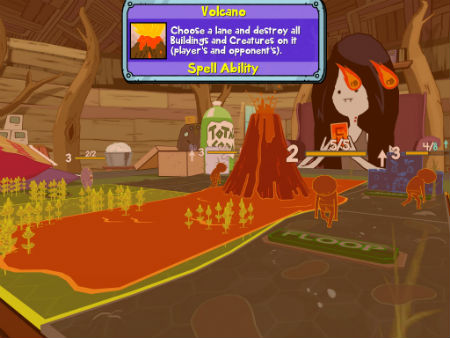 So, if you're packing lots of creatures and not much else, on what do you spend all those magic points once you've filled all four lanes?

Why, flooping the pig, of course!

It's easy to overlook this, sure, but many of the monsters have useful floop powers, although you may need to read them carefully to appreciate their utility.

Watch especially for floop abilities that pile extra damage onto the enemy (like that of the Wandering Bald Man) or that have attack buffs (like the Cornball and Husker Knights).

The Cornball and Husker Knights can be invaluable. This is because they're cumulative: each time you floop a Husker Knight, the adjacent creatures get a permanent +2 attack and will quickly be able to trample everything in their path.

However, they first have to survive the enemy onslaught. This is where the battle wheel comes in. If you turn this off, then attacks always hit. With it on, however, you have the chance to defend and even counter enemy attacks for the cost of a small chance of missing your own attacks.

With a little practice, you should be able to land your hits most of the time. So, while blocking and countering are more difficult, it's worth using the wheel for the times you manage to pull it off.

The purpose of all this, of course, is to progress through the land of Ooo in the single-player campaign. Forward momentum being what it is, it's tempting just to keep marching through the land as you defeat each opponent, replaying your losses until you win.

But this is a mistake. You'll quickly find an opponent that's too powerful to take down with your current deck and level. You could burn gems to progress, but that's going to get expensive... and fast. Why not earn gems instead? 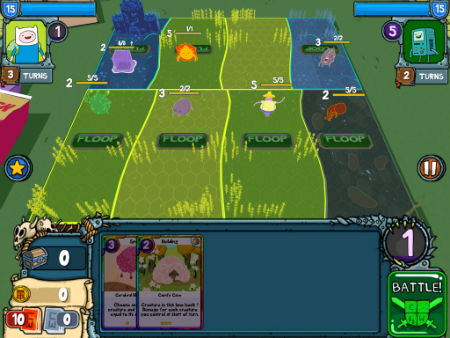 The game doesn't initially make this clear, but if you try and replay a level and obey one of the simple instructions the game suggests, like not using buildings (no big deal since you shouldn't be using many in the first place), you get an extra star.

Get three stars and you're rewarded with a free gem.

At that point, there's no value in replaying the level a fourth time. In addition to the gem, though, you've gained some XP toward levelling-up, some gold, and some new cards.

From the off, then, it's worth playing each battle three times to get your stars. Do it that way and you should cope with the increasing difficulty spikes as you go through the game.

Whether you're collecting gems for free or ponying up cash to add them to your stash, you'll have to spend gems at some point. You should mostly be spending them on Algebraic Chests, which contain much better cards than Cool Chests.

Other gem benefits like additional energy and game continues after defeat aren't worth it unless you're terribly impatient. Far better to keep trying until your energy is depleted and then just wait for it to refill.

So, why are you still reading this? Armed with this new knowledge, it's time to stop hiding in the Useless Swamp and become the Immortal Maizewalker. Go!