The thrill of the bullet hell is built around excess. The more bullets, lasers, enemies on screen, the more satisfying it is to weave your way through the onslaught. Often your hitbox is a mere point on your ship, letting you slip through the narrowest gap between bullets.

Bullet Hell Monday understands this. Ten stages into its 50 stage campaign, a typical level is a kaleidoscopic rush of incoming projectiles, your ship's single light guiding you through the storm.

While many shooters choose the endless high-scoring survival route, Bullet Hell Monday eases you into its hectic action. Divided into five chapters with ten levels each, each stage carefully ratchets up the chaos, introducing new enemies and hazards before mixing them together in increasingly challenging ways.

These stages are short, which works in the game's favor as they're lengthy enough to offer a adrenaline rush of action without feeling like a slog. Each level offers myriad optional missions, ranging from earning a certain score to not taking damage, and rewards you with experience to upgrade your ship.

While the rising price of upgrades and need to complete missions for more experience can make Bullet Hell Monday feel like a grind at times, the game also rewards you regularly with unlocked content. Defeating the first boss opens up a relentless Challenge mode, while new stats and ship types to improve become available as well

Through upgraded stats and weapons, your simple fighter evolves into a screen-clearing one-ship armada. Each ship type comes equipped with a unique weapon and bomb - laser, homing missiles, wide shot, shield - that feel suited for specific enemies and scenarios. (The game is free to download, with homing and shield types unlocked through one-time in-app purchases.)

The homing missiles and wide shot make short work of the massive hordes in Chapter 2, the multi-shot stream of the laser ship can easily wipe out waves, and so on. 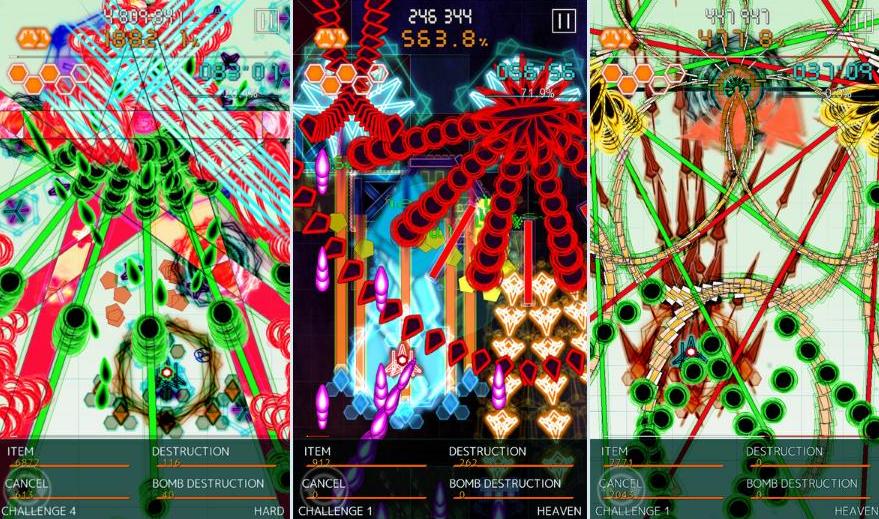 But the greatest advantage is your maneuverability, as you dodge and weave between the copious amounts of enemy firepower. Later stages are practically abstract works of art, due to the number of laser lines, bullet patterns, and ship formations filling the screen. And yet Bullet Hell Monday never feels impossible, thanks to the short stage length and easy-to-track light on your ship.

Of course, that's all on Normal difficulty. Hard and Heaven modes are true tests of your bullet hell prowess. Regardless of what difficulty you choose, Bullet Hell Monday offers vibrant and satisfying shump gameplay.