It might strike you as a slightly strange squishing together of franchises. Portal plus Bridge Constructor is hardly a crossover that fans have been clamouring for.

But in the end, the concept actually works pretty well. You get the humour of Portal, plus its ridiculous science, with the slightly more stable (hahaha a pun) bridge-building of Bridge Constructor.

It's not perfect, and it's certainly skewed more to fans of BC than Portal, but it's definitely worth checking out all the same.

The game starts with you getting a job at Aperture Science. From there you're walked through the basics of bridge building by Glados.

The levels in the game are housed in test chambers, and you need to build a way for a driver to get from point A to point B.

As you progress though, you'll find that one bridge isn't enough. And you need to get through a series of portals to get to the exit. 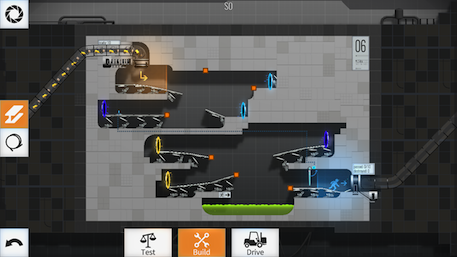 It's not just about bridges though. There's a good deal more whimsy here. You need to build ramps to jump over, platforms to land on, and plenty more besides.

There are other parts of the Portal universe here too, and they turn what could have been a slightly staid experience into a really intelligent puzzler.

There are a few problems here though, partly the squishing together of two visual styles. It's a bit jarring at times, but once you're over that it does fade into the background.

While the game might be better for those of a bridge constructing bent, the lighter touch here, and the extra layers of puzzling that the Portal trappings bring do make this a more appealing prospect.

It's fun, it's clever, and with a huge chunk of levels to work your way through, it's pretty packed with content as well.

If you slavishly refuse to play anything that involves building, then it's not going to be for you. But if you're looking for a special sideways look at two different franchises then it's well worth checking out.

A bright and funny reworking of Bridge Constructor with some special Aperture Science trappings
Next Up :
Jade Order review - "An puzzling path of the warrior"