iOS + Android
| Bridge Constructor Medieval
Get
By Harry Slater
| May 1, 2014

I am awful at building medieval bridges.

They buckle before any soldier has even put an armour-clad toe onto them, collapsing under the pull of gravity and my own calamitous designs.

But I struggle on, lashing ropes to logs and ceilings to stone pillars. Then it all collapses again and everyone dies and I probably get beheaded for my ineptitude.

That's part of the fun of Bridge Constructor Medieval though, you have to have a grim cackle as a group of soldiers plod diligently into the ravine that your far from proud structure once briefly crossed.

And it makes each successful crossing that little bit sweeter. You can't help but watch in a vague state of panic as the logs and planks that make up your bridge glow yellow under the weight of the first convoy, or the first battering from enemy catapults. 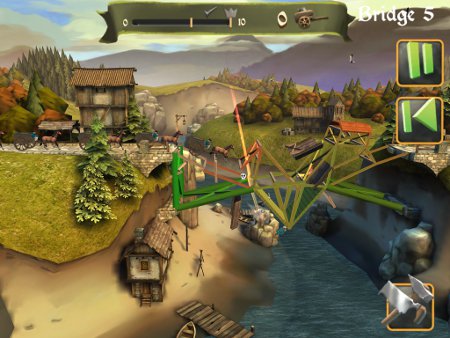 Guys, you could just stop walking if you wanted

That's the one thing that Bridge Constructor Medieval adds to the template of the original - a bit of variety.

You're still essentially drawing your bridge in the creation screen, choosing your materials like brushes and then snapping them onto the grid the game gives you.

Blobs show where the slices of wood and stone interconnect, and double-tapping on a piece will remove it.

But this time you're aiming to get multiple units across your structure, sometimes protecting them from giant rocks that an enemy army is tossing at you.

As the game goes on you'll need to build traps into your bridges as well to make sure the advancing hordes plummet to their deaths before they reach your camps. 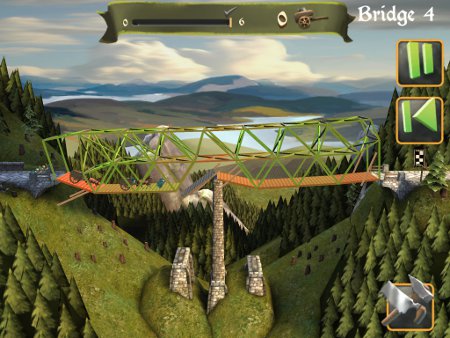 It's all wrapped around a story with a tongue firmly lodged in its cheek. Bridge Constructor Medieval knows that we're here for the collapses and the successes, and that everything else needs to take a back seat.

If you weren't that enamoured with the original, then there's not a whole lot here that's going to change your mind, but there's a rich and silly bridge building game here that fans are going to lap up.

Bridge Constructor Medieval blends together puzzling, construction, and a bit of strategy to create something that's an awful lot of fun.

Bridge Constructor Medieval might not have the biggest box of tricks, but it uses them to great effect
Next Up :
Hero Emblems II review - "Lovely visuals and music, but match-3 combat lacks strategic depth"