There's something special about Botanicula. It's a warm and welcoming game that lets its puzzles grow organically, developing them as it builds its brightly coloured world.

But it's not just that over arching atmosphere it gets right, it's the little touches as well.

From the glee-filled sound effects when you successfully complete a task, to the grumpy grumble of an inadvertently tapped bug, the game is awash with charm.

And on top of that charm there's an overt feeling of wonder in each screen. A child-like glee that pulses through the scuttling footfalls of the five main characters, and finds a hold in every corner of the experience. 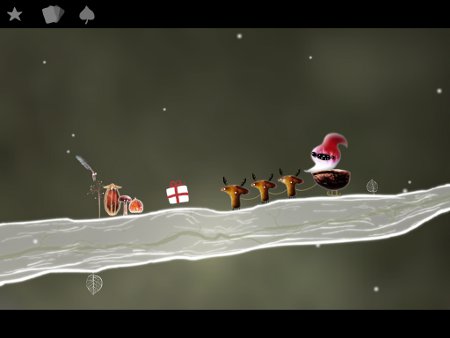 Sometimes a picture says a thousand words. Other times...

Botanicula takes place on a tree. And sometimes it's in space. Or in the belly of a slug. Or on a branch where it's Christmas. It tells the story of five plucky insects out to save their home from destruction.

Skittering black spider beasts are sucking the life out of the tree, turning green leaves see-through, pulling the heads off unwary insects, and scaring our troupe of bugs any time they get too close.

The aim of the game is to transport a seed safely through the branches of a tree, but along the way you'll need to unlock bean pods, find some lost children, and discover the sound a caterpillar makes when it's flung in the air by a spike.

Everything is controlled with taps, and there are no buttons or any real indicators of where you should be jabbing your digit.

Most of the world reacts in some way when you give it a prod, and it's worth experimenting just to see the different reactions you can create. 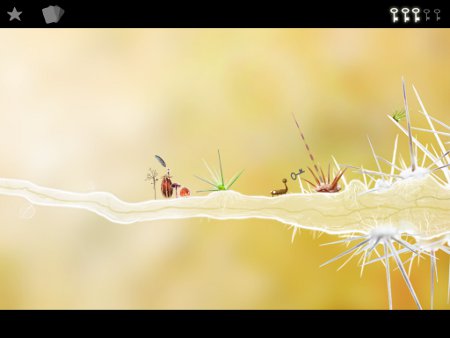 Every now and then you'll need to choose the right bug to solve a particular puzzle. Of the five there's a skinny twig, a flying feather, a portly poppy pop, a short mushroom, and a round thing that's carrying the seed.

They all have different powers, of a sort, but tapping through them all when you're faced with a choice provides you with some hilarious, heart-warming failures.

In fact, it's worth spending the extra time getting things wrong just to see the various accidents and mishaps the rest of the crew get themselves into.

There's no bravado here, no violence or posturing. There's just a simple, endearing story, told without the need for words. And every moment of it is a joy. 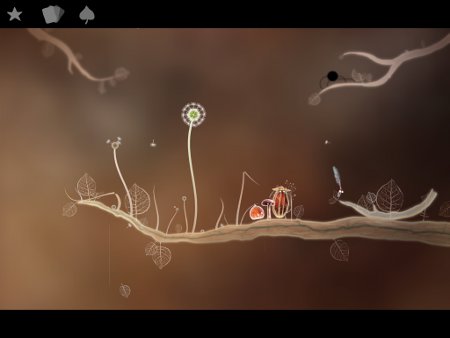 If you've already played Botanicula then this new version won't hold too many surprises for you, but if you've yet to experience the wonderful game, then this iPad version is a brilliant way in to the adventure.

It might be a little on the short side, and some of the puzzles might require a bit too much prodding around at the scenery in hope, but Botanicula is such an enjoyable place to visit that it's unlikely you're going to mind.

There's a living, breathing world to explore here, full of mysteries and secrets that are a joy to discover.

There aren't many developers brave enough to tell a story without words, but Amanita Design pulls it off magnificently in Botanicula.

A bold, bright, and brilliant point-and-click adventure, Botanicula is an experience to be savoured
Next Up :
Catalyst Black review - "Gorgeous visuals, smooth gameplay and fun-filled fights"