But there are also some key differences between the two.

Differences in the economy, in the way battles are laid out, in the control you have over troops, in the map, and in the progression.

So, whether you're a Clash of Clans veteran checking out Supercell's latest game or you're a complete newbie who has stumbled on this new free-to-play strategy game, the following handy tips should help you storm through the first few hours of the game.

With these tips, you'll find out how to invade enemy bases, keep your troops alive, use your gunship's special abilities, and get the most from the early selection of unit types.

Headquarters - Unlike in Clash of Clans, the only way to win a battle in Boom Beach is to destroy the enemy's headquarters. So, don't worry about tiny buildings or out-of-the-way defences: focus on the HQ. 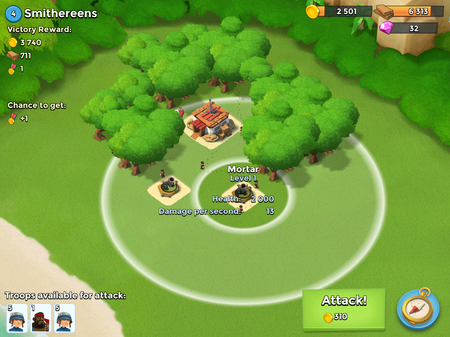 The scout shows that mortars and cannons can't attack your troops if they come too close Scout - Always use the scout button to see a battlefield before attacking, and look at the attack radius of each defensive weapon (by tapping on turrets and cannons) to plan your attack.

Plus, you might discover that you need to go back to base and change your troops to suit the defences against which you'll be going up.

Flares - Flares, which you unlock when your headquarters reaches level 3, are incredibly important. They let you tell your troops where to go and what to shoot.

You can use them to concentrate all troops on a specific dangerous turret. But be careful: if you tap near - but not on - a turret, your guys can walk to that point without shooting, opening them up to danger.

You can also tell your troops to attack boxes and buildings, which will yield you more gunship tokens for more artillery attacks.

Tokens - Unused gunship tokens cease to exist after a battle, so don't be stingy. Basically, use as many as you can for artillery, flares, medpacks, and more. The number of tokens with which you start each battle is determined by your gunship's level. Friendly fire - Artillery strikes (and, later, the powerful gunboat barrage) can hurt your own troops, so aim well away from your army. Mines - Your gunship's artillery fire can detonate mines. Use this, and flares, to clear a safe path through particularly tricky minefields. Riflemen - Riflemen are the first units in the game. You use them to overwhelm enemies with sheer numbers. Cannons and mortars, for example, have a slow rate and can't keep up with these troops. 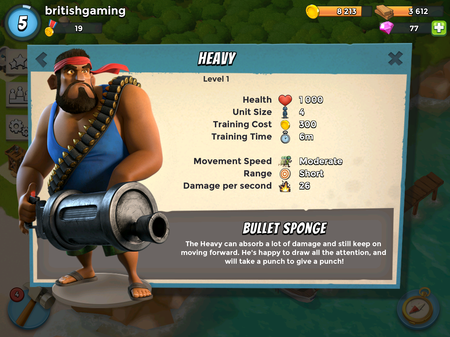 Always send Heavies on first, to protect your weaker troops Heavies - Don't be fooled by the Heavy's massive mini-gun. These chunky dudes deal out very little damage, so are best used to draw enemy fire while Riflemen and Zookas do the actual fighting. Zookas - Zookas, the third unit in the game, deal out massive damage but are vulnerable to enemy fire. Keep them safe behind bullet-sponge Heavies when storming enemy weapons. Back at base

When you return to your home island, you'll need to know how to spend your cash and resources; how to defend your war chest from enemy invaders; and how to get diamonds.

Headquarters - Unlike in Clash of Clans, there is no penalty for upgrading your headquarters here. Make this your top priority at all times, then, so that you're always getting new abilities, buildings, and unit types. Builders - Looking for that second builder, which was so valuable in Clash in Clans? Don't be - you can only ever build one thing at a time in Boom Beach, so you'll need to wait or pay up to build or upgrade another. 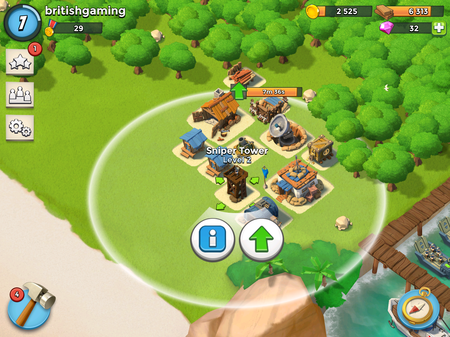 Keep your buildings clustered around turrets so enemies can't attack anything without going through your cannons and snipers Defence - Your island is open to attack from other players, so you need to defend it. Push all your buildings far away from the shore. Tap on turrets and sniper towers to see their attack radius, which will help dictate their placement. Replay - If your base gets ransacked in an enemy attack, open the world map, tap the button with three lines, and find 'home base raided'. You can now watch a replay of the attack to find weak spots in your defence. Vault - Get a vault. This handy building stores gold and resources that are impervious to enemy attack. Furthermore, it protects a percentage of your entire war chest. Keep it upgraded to increase its effectiveness. Helping hand - The friendly gold and resource boats aren't pillaged by enemy invaders, so you can keep some loot safeguarded by ignoring those boats for a while. But they do have a maximum capacity, and can't collect more resources when full. Unit sizes - Each unit has a different size, from the tiny artillery (one) to the enormous tank (eight).

Consider this when upgrading landing craft - the level one craft has a troop capacity of 5, which means it can carry five riflemen. It can only carry one heavy (four) until it is upgraded to have a capacity of 8, though.

Map tip 1 - The buildings you see poking out of the clouds on the map screen are vital resource bases. These provide a steady secondary flow of materials when under your control. Work towards uncovering those clouds first. Map tip 2 - Running out of islands to attack? Either upgrade your radar to uncover more clouds or just wait. Over time, the enemy will take over liberated islands, giving you fresh battles to fight. Ding! - Look at the achievements menu (the button with three stars on your base camp screen) and complete the objectives to earn huge diamond rewards. Diamonds - At this early stage, you pretty much exclusively use diamonds to rush upgrades, either by expediting wait timers or by immediately buying resources.

You'll probably want to save them for the extremely long and expensive late-game upgrades, so be patient and sit through the wait timers (and steadily accrue the necessary resources) at this early stage. 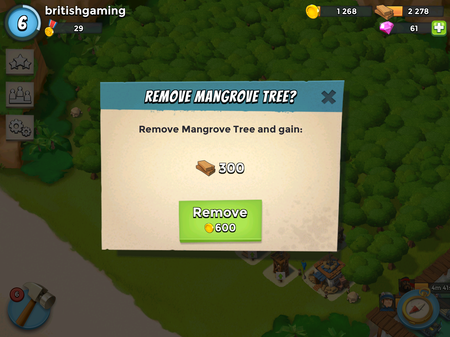 When your HQ reaches a certain level, you can remove stones and get stone for your quarry Lumberjack - Got a lot of money but need some quick wood? Chop down a tree. Added advantages? You can increase your base size and build effective defensive shapes. Armory - Once you have covered and upgraded the basic buildings, you should chase after the armory, which you unlock at headquarters level 4. This building lets you significantly boost the strength of units, defensive turrets, and gunboat powers.

We want YOUR tips now! Tell us what you've learnt in Boom Beach in the comments section below, and we'll add the best advice to this feature.